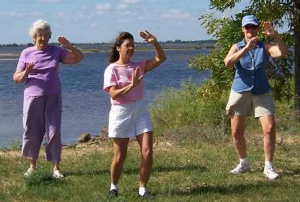 Tai Chi emphasizes breathing and movement that are both flowing and graceful. Though its primary action is in the movement and breathing, this must all be carried out with particular mental focus during Tai Chi. This is why Tai Chi has often been referred to as “meditation in motion.”

In theory, Tai Chi directly affects qi—the “vital energy” or “life force” of the body—where proper flow of qi is said to be necessary to maintain health. During Tai Chi, this energy flows through the body through a network of 20 pathways (meridians from acupuncture). When these pathways are blocked, qi does not flow properly, and in theory, illness ensues. Tai Chi is thought to stimulate this flow of qi through the body and organs through its movements and breathing. Tai Chi can be seen as acupuncture from the inside.

From a more scientific standpoint, Tai Chi is not unlike other forms of low-impact exercises; however, Tai Chi focuses more specifically on posture and alignment.