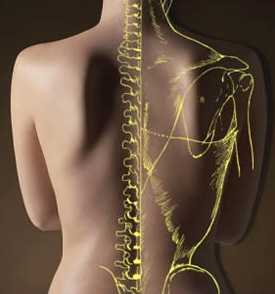 Posteroanterior (PA) mobilization is effective for reducing spine stiffness and the magnitude of pain in patients with low back pain, study findings show.

“The key experimental finding of this study is that the pain experienced by the patient may be reduced by manipulating mechanical mechanisms which could be targeted at reducing the bending stiffness of the spine,” the researchers explain.

This finding also brings into contention the definition of stiffness, which has previously been given as the ratio of the PA force applied to the corresponding displacement observed. But Gary Shum (Plymouth University, UK) and colleagues say that their definition considered the spine as a beam that provides a measure of the bending behavior of the spine.

Indeed, they found that the bending stiffness of the spine was a highly repeatable measurement that could be used reliably for future research.

In all, 19 patients with low back pain and 20 healthy individuals participated in the study. They received three cycles of 60 seconds, grade III PA mobilization at the L4 level on one occasion.

After PA mobilization, the lordotic curvature of back pain patients increased significantly from an average 7.13° to 15.19° when the applied PA load increased from 50 N to 250 N, compared with a change of 6.72° to 7.83° before treatment.

Bending stiffness of the spine decreased from an average 0.09 Nm2/° at a PA load of 250 N before treatment to 0.06 Nm2/° after mobilization; a level similar to that of the healthy individuals, the researchers note in the Archives of Physical Medicine and Rehabilitation.

Pain intensity was decreased significantly and immediately after PA mobilization, with an average improvement of 1.69 on the Visual Analog Scale, which the researchers say is “considered to be clinically significant.”

They add that “excellent correlation was found between the magnitude of pain and the bending stiffness before and after PA mobilization.”

The team therefore calls for further exploration into the long-term changes in the relationship between pain, stiffness, and spine motion, as the natural course of back pain.