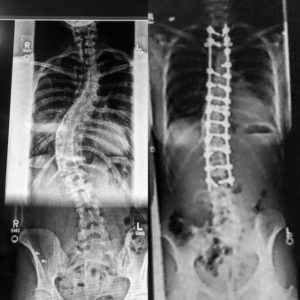 (L) Before surgery, the curvature in Madilynn Gore’s spine was 50 degrees. (R) Post surgery, x-rays showed that the curve was reduced by nearly 100 percent.

Madilynn Gore was 12 years old when she first noticed that her left rib was elevated when she laid flat on her back. She went to see a physician who diagnosed the curve in her spine as scoliosis. By the following year, the curve had grown worse, and her physician recommended a back brace to slow its progression, but she explains, “No 13-year girl wants to wear a back brace.”

Worse than the deformity’s appearance was the excruciating pain. Following her shift in the restaurant where she worked, she would go home and be in tears. Then, on Christmas Eve in 2013, her 80-year grandmother, who has scoliosis, missed a step and fell. “One hip was taller than the other. That’s what caused her fall. She hit her head and had to have brain surgery,” says Gore. “I didn’t want to put my family through the same trauma in the future, so I decided to see a surgeon.” 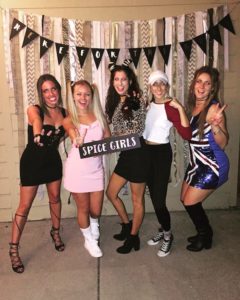 Five weeks after surgery, Gore dressed up for Halloween with friends.

The 22-year old college graduate went to see Dr. Michael Janssen, a spine surgeon at the Center for Spine and Orthopedics, in 2014. By then, the magnitude of curvature in her spine had reached 50 degrees, a point at which most surgeons agree, is cause for surgery. Without it, scoliosis can get worse and eventually affect cardiopulmonary changes.

Dr. Janssen was optimistic about straightening Gore’s spine. “He was very assuring of the process,” says Gore. “It’s reassuring when your surgeon is confident.” 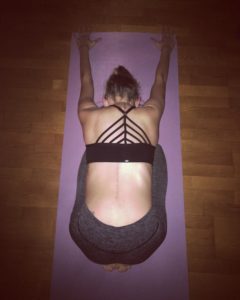 On September 18, 2017, Dr. Janssen performed spinal fusion on Gore’s spine. He realigned her spine from the thoracic (T-5) to lumbar (L-2) segments and fused them together so that they would heal into a single, solid bone. Fusion completely stops the growth in the spine’s abnormal segment and prevents the curve from getting worse.

On Tuesday, the day after surgery, Gore was up, walked a little and brushed her teeth. Three days after surgery, she showered, and then on Friday, she returned home. After six weeks, she began physical therapy. She also got the green light to drive, do yoga and return to her job at Group14 Engineering in Denver. Soon, she hopes to be running with her golden retriever again. 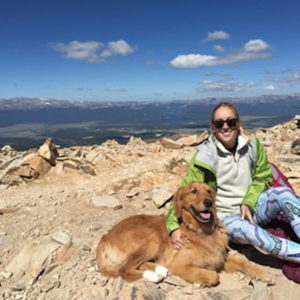 Now, Gore hopes to be running with her Golden Retriever again soon.

Gore says that the recovery process is 99 percent attitude. “You have to be willing to do what your doctor tells you to do if you want to get better.” She advises others to “get treatment before it’s too late because it will keep progressing without it.

“Dr. Janssen did an amazing job. I would highly recommend him,” she says. “My spine is pretty straight now. I never imagined it could be this straight.”