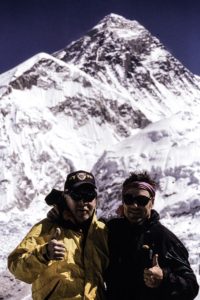 Colorado outdoorsman, Mike McDonald, was ice climbing in Colorado Springs to prepare for an ascent of Mt. Everest in fall 2002 when his crampon loosened, causing him to slip. McDonald tore the cartilage in his left knee. After the accident, he was in constant pain and could hardly walk, even with crutches.

The mountaineer went to see Dr. Christopher Isaacs, an orthopedic surgeon at the Center for Spine and Orthopedics, to diagnose and treat his injury. An MRI revealed a torn meniscus, and Dr. Isaacs recommended knee arthroscopy to repair the tear. McDonald underwent surgery in February 2002. During the procedure, Dr. Isaacs inserted a miniature camera through a small incision to have a clear view of McDonald’s knee and then used miniature surgical instruments to repair the tear. 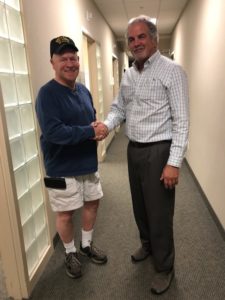 “I could not have done Everest and continued climbing these past 15 years without Dr. Isaacs,” says Mike McDonald. Dr. Isaacs performed McDonald’s knee surgery in 2002, enabling the mountaineer to attempt an ascent of Mt. Everest in fall 2002.

McDonald returned home from the hospital on the same day of his surgery. After two weeks of physical therapy followed by exercises to strengthen his knee, McDonald was able to accompany a group led by climbing legend Gary Scott to climb Mt. Everest that fall as planned. During their first 34 days in the area, the group adjusted to the altitude by hiking 60 miles and climbing several 14,000- to 19,000-foot peaks before reaching the base of Everest. Although he did not make the final ascent to the top, McDonald felt that he had lived his dream to climb Everest, one he had had since Sir Edmund Hillary made the first ascent of Everest in 1953. At that time, McDonald was only eight years old. 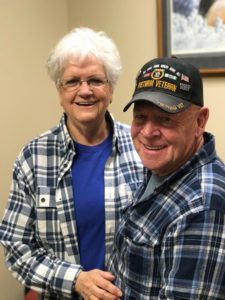 This past year, 15 years after his first visit to the Center for Spine and Orthopedics, McDonald returned to see Dr. Isaacs for pain in his left knee and recently completed a series of three weekly Orthodisc injections to treat his pain.

In addition to climbing, McDonald and his wife, Blynda, who live in Powderhorn, CO, enjoy skiing and snowmobiling with their children and grandchildren in the winter as well as hiking, traveling and four-wheeling in the summer. On their 45th wedding anniversary, the couple went hiking, kayaking and zip lining in Kauai. On their 50th anniversary last year, the two hiked 30 miles in three days at Arches National Monument and Zion. Next month, they plan to return to one of their favorite destinations, the Upper and Lower Antelope Canyon, in Page, AZ, to hike underneath a river bed, one of the most unique hikes they have done .

Of Dr. Isaacs, McDonald says, “I could not have done Everest and continued climbing mountains these past 15 years without him.”

Dr. Mark Flanigan Back on the Tennis Court After Robotic-Assisted Knee Replacement
January 10, 2022

How To Protect Your Spine At Amusement Parks
June 29, 2020