As a disc degenerates, it can herniate (the inner core leaks out), which is known as a disc herniation or a herniated disc. The weak spot in the outer core of the disc is directly under the spinal nerve root, so a herniation in this area puts direct pressure on the nerve, which in turn can cause sciatica. Pain that radiates down the leg and is caused by a herniated disc is called a radiculopathy.

Lumbar Herniated Disc Symptoms
Approximately 90% of disc herniations will occur toward the bottom of the spine at L4- L5 (lumbar segments 4 and 5) or L5- S1 (lumbar segment 5 and sacral segment1), which causes pain in the L5 nerve or S1 nerve, respectively. 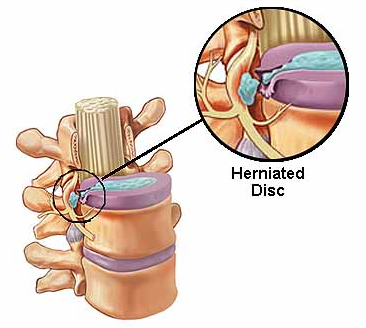 L5 nerve impingement from a herniated disc can cause weakness in extending the big toe and potentially in the ankle. Numbness and pain can be felt on top of the foot, and the pain may also radiate into the buttock.

S1 nerve impingement from a herniated disc may cause loss of the ankle reflex and/or weakness in ankle push off. Numbness and pain can radiate down to the sole or outside of the foot.

Lumbar Herniated Disc Treatments
In most cases, if a patient’s low back and/or leg pain is going to get better after a lumbar herniated disc it will start to do so within about six weeks. While waiting to see if the disc will heal on its own, several non-surgical treatment options can help reduce the back pain, leg pain and discomfort caused by the herniated disc.
Several of the most common nonsurgical treatments include:
•    Physical therapy
•    Osteopathic/chiropractic manipulations
•    Non-steroidal anti-inflammatory drugs (NSAIDs)
•    Oral steroids (e.g. prednisone or methyprednisolone)
•    An epidural (cortisone) injection

If the pain and other symptoms continue after six weeks, and if the pain is severe, it is reasonable to consider microdiscectomy surgery as an option to alleviate the pain from the herniated disc.

Lumbar Herniated Disc Surgery
A microdiscectomy is designed to take the pressure off the nerve root by removing the portion of the disc that is pressing on it, and to provide the nerve with a better healing environment. Using microsurgical techniques and a small incision, a microdiscectomy can usually be done on an outpatient basis or with one overnight stay in the hospital, and most patients can return to work full duty in one to three weeks.

With an experienced surgeon, the success rate of surgery for a lumbar herniated disc should be about 95%. Usually, only the small portion of the disc that is pushing against the nerve root needs to be excised, and the majority of the disc remains intact.

Unfortunately, approximately 10% of patients will experience another disc herniation at the same location. This is most likely to happen early in the postoperative period (within the first three months), although it can happen years later. Usually a recurrence can be handled with another microsurgery, but if it keeps recurring multiple times, a fusion surgery to stop the motion at the disc level and remove all the disc material may be considered.