How To Avoid Knee Pain & Injury In Yoga For Sensitive Knees 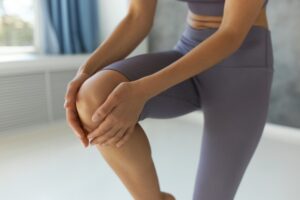 Understanding the anatomy and the functions of the knee is important to understand to avoid pain and possible injury. Continue reading below to learn how to avoid knee pain and injury so you can keep enjoying yoga! Click here to learn more about common symptoms, conditions, and injuries often treated by CSO, and contact us for help with your knee pain today!

Knee pain in yoga is, unfortunately, a rather common occurrence. And even though yoga can be a great tool for knee injury recovery, people with sensitive knees often have a hard time in a yoga class. In this detailed blog, I am sharing with you 11 tips and modifications on how to prevent knee pain in yoga and how to make sure that your students avoid knee injury.

At the very beginning of this discussion lies the fact that yoga asana practice has been plucked out of its cultural context and placed in the West. Most practitioners forget that in India, sitting on the floor has been a way of life for a long time.

Think about women squatting to cook, workers squatting to build things, and the traditional toilet which requires you to squat down. Therefore, (traditionally) Indian hips and knees are much more flexible than the ones from people from the West. Lotus variations are the norm for many traditional yoga postures, as it was assumed that lotus can be done easily.

In the West, we are used to sitting on chairs, and we hardly ever squat down for anything. So, when yoga was brought to the West, it unfortunately, led to suffering knees. It doesn’t mean that we all can never do Lotus. It just means that not everyone should try and if you have the possibility to safely try, it may take a long time until you get to a Full Lotus Pose. 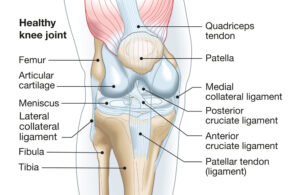 The knee is highly influenced by the joint below (ankle) and the joint above (hip joint). More often than not, when an injury occurs to the knee, the cause of the injury is directly or indirectly related to some dysfunction in one or both surrounding joints.

Like the ankle, the knee must be strong as it holds a great amount of our body weight. In addition, it must be flexible enough to

deal with the adaptations made of the ankle and foot.

Knee issues and injuries are mainly related to one of the ligaments of the knee or the menisci. Below is a short overview of the knee’s anatomy:

Ligaments of the knee

The menisci (plural) are two semi-circular pieces of additional cartilage sitting on the almost flat area of the tibia. There is one on each side, the medial (inside) and lateral (outside) meniscus of the knee.

The purpose of the menisci is to provide a cup for the femur to rest on top of the tibia. Through its spongy quality, the menisci serve as shock absorbers and make movements, such as flexion, extension, and rotation possible.

The menisci are not fixed in place, they move and distort their shape, are squished, and slide as we move our knees.

For anatomy geeks: What are the muscles around the knee?

There are three main muscles that directly impact knee function: The quadriceps, the hamstrings, the Iliotibial band.

An imbalance in these muscles can cause discomfort or even injury in yoga practice. In a well-structured yoga class, we equally stretch and activate these muscle groups to bring them into a better balance.

Quadriceps: This is a large muscle group that includes the four prevailing muscles on the front of the thigh. Quadriceps literally means four heads. It is the great extensor muscle of the knee, forming a large fleshy mass that covers the front and sides of the femur. All four quadriceps are powerful extensors of the knee joint. They are crucial in walking, running, jumping and squatting. The quadriceps, specifically the vastus medialis and vastus lateralis play the important role of stabilizing the patella and the knee joint during these movements. All four muscles converge around and are attached to the patella and then continue through a ligament (the patellar ligament/tendon) to attach to the top of the tibia.

The Iliotibial Band: The ITB runs along the outside of the leg down to the tibia. It is a long piece of fascia that connects to the pelvis via a muscle called the tensor fascia latae. It helps to stabilize the knee, especially during walking and running. With overuse, the ITB can adhere to the fascia of the lateral quadriceps beneath and therefore restrict movements. A loose ITB however might cause instability for running and cycling, a tight ITB can cause pain at the knee when in postures that require external hip rotation

How to prevent knee pain in yoga

In order to prevent knee strain and avoid knee pain in yoga we have to keep two principles in mind:

The knee joint is a hinge joint. This means that the knee can open and close, just like a door. Anatomically speaking, the knee joint mainly allows for flexion and extension, BUT it also allows a small degree of medial and lateral rotation. This rotation can only occur when the knee is flexed. If the knee is not flexed, the rotation happens at the hip joint.

In my experience, treating the knee as if it can’t rotate helps me and my students to keep the knees safe. It’s incredibly difficult to measure or sense the safe range of rotation, as we are engrossed in our practice.

Now, in our yoga teacher training courses, we speak a lot about the functionality of yoga practice, versus an aesthetic approach. Each yoga pose has muscular target areas that we want to place appropriate stress on. That stress can be in terms of feeling a stretch, but it can also be a contraction, an activation. To measure the appropriate amount of stress, we use the tool of the traffic light.