8 Ways to Stick to Your Diet While Friends Indulge

It’s easy to make New Year’s Resolutions to eat a healthier diet… But it’s not so easy to keep them. These simple tips will help you stick to your diet to reach your goals and work towards a healthier lifestyle. 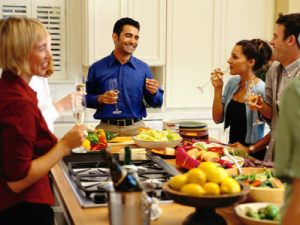 Your boyfriend offers you a gargantuan bowl of his butter-soaked fettuccine alfredo. Your friends hand you a fork and beg you to share the chocolate tower truffle cake at the Cheesecake Factory.

It’s tough to stick to a healthy eating plan when those around you are indulging. It’s even tougher when they’re bent on making sure you indulge, too. But don’t stress it. These eight tricks will help you stay on track without alienating the not-so-healthy eaters in your life. Heck, you may even inspire them to join your cause.

1. Go on, take a bite.
Indulgence loves company, so expect a guilt trip if you pass on a temptation your friends gave in to. Make it easy on yourself, then: Pick up your fork and have a small piece of whatever is being served.

If you say, “I’m stuffed, but this looks so delicious I can’t pass up a bite,” you’ll avoid peer pressure by turning the situation around—you’re indulging, not depriving yourself. And you won’t make your friends feel bad by rebuffing their generosity. Besides, one bite of dessert won’t make a dent in your diet, says Lacie Peterson, a registered dietitian with the University of Utah.

2. Create a diversion.
Can’t enjoy a bite without whetting your appetite for the whole cake? You needn’t explain why you’re skipping dessert—just divert attention from your pass. As the serving dish goes around, strike up an amusing conversation or excuse yourself to make a phone call. Better yet, bring along a bag of almonds and say you’re craving a handful of those instead. Again, you’ll put others at ease by having a treat along with them.

By creating a distraction, you’ll fare better, too: Making a fuss over food restraint often intensifies cravings, which can lead to overeating, according to a 2005 University of Toronto study.

3. Serve yourself.
You can still stick to your healthy eating streak while having what others are having—just adjust your portions. Fill half your plate with fruit or vegetables, a quarter with meat or protein, and a quarter with starches like potatoes or bread, Peterson suggests. Bonus if you can swap starchy carbs for whole-grain pasta, rice, or bread.

If you can’t prepare your own plate, there’s nothing wrong with asking the server for smaller portions. In the end, though, it might be better to stray from your diet once than offend the host by eating nothing more than a dry turkey shaving and a spoonful of peas.

4. Monitor your pace.
In group settings, it’s easy to get caught up in an eating frenzy, subconsciously matching others plate-for-plate. You can prevent gorging by filling up a little beforehand, says trainer Mark Verstegen, director of performance for the NFL Players Association and founder of the website Core Performance. “Make sure you arrive hydrated and have a small snack like a handful of almonds, or a banana with peanut butter, so you aren’t [as] hungry,” he says. 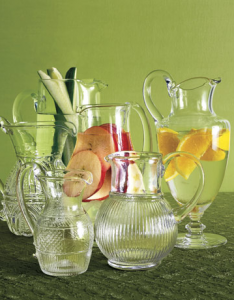 Watch out for drinks, too. “Cocktails can pack up to 500 calories a glass,” says Verstegen. At the bar, sip slowly or alternate between high-calorie beverages and water. If your friends catch you empty-handed while they’re drinking, they’ll likely order another round.

5. Praise healthy dishes.
You might think you’re being a polite dinner guest by saying you wish you could have some of that creamy artichoke dip. But it’s better to leave diet sabotage out of the conversation. It can make the cook feel bad about preparing food his or her guests can’t eat. Instead, shift your focus to the fresh fruit salad or the presentation of a low-fat dish.

By treating healthier items like indulgences, the host may be more inclined to foist those on you—or at least let you off the hook when it’s time for dessert.

6. Share your diet details respectfully.
You feel great since you started eating healthier, and naturally you want to share that with others. But if your friends aren’t ready to assess their eating habits, pushing them to avoid foods loaded with fat, salt, and sugar could feel like an ambush. Smugly waving food away with an, “I don’t eat that garbage,” or “Do you know what’s in that?” might actually make them redouble their efforts to sway you.

If you don’t want to be hassled about your eating choices, don’t put your friends on the spot either. Wait until they express interest in your diet. Then humbly share the details.

7. Schedule an activity.
Don’t let food be the centerpiece of a social gathering, advises psychologist Susan Albers, author of Eat, Drink and Be Mindful. Get-togethers are often focused on eating, and if you’re distracted, nervous, or simply basking in how much you’re enjoying yourself, you’ll probably get carried away.

Albers suggests bringing a board game or some photos to a dinner party. Going for a walk after the meal is another good way to shift the focus away from the table. And you might sidestep the dessert dilemma altogether.

8. Prepare to be firm.
If you have a habit of caving in when pressured by your friends, make sure you’re not sending mixed messages. Come prepared with a game plan that defines in your mind what you’ll eat and how you’ll respond to temptation. This way, they won’t interpret your hesitation as a cue to push the chips and dip your way.

Bottom line: If friends are pressuring you to indulge, it’s probably because they want you to enjoy yourself. The best way to respond is to keep the dialogue positive. Rather than saying you can’t or shouldn’t have something, say you aren’t hungry or it’s not your favorite. They can’t argue with that.