One of the patients, Matt, an active 35 year old, underwent the procedure under the care of Michael E. Janssen, D.O. of the Center for Spinal Disorders to treat cervical disc degeneration that developed as a result of a traumatic injury Matt suffered in a collision while playing hockey in October of 2006.  Initially, Matt dismissed the pain and stiffness, but when he began to experience numbness in his left-hand he sought medical attention.  An MRI revealed Matt had a herniated disc that was pressing against his spinal cord.  Despite six months of physical therapy, Matt’s symptoms worsened and he had a second MRI which showed he was suffering from cervical disc degeneration along with a disc herniation.

“It was clear I wasn’t getting better and my doctors agreed surgery was my best hope,” said Matt.  “As a father of two boys ages eight and six, it was critical that I find a procedure that would give me the best chance to remain active and have the mobility in my neck that I needed.”

“Given Matt’s age, diagnosis, overall health, and his desire to maintain an active lifestyle, I decided ProDisc-C Total Disc Replacement was his best option,” said Dr. Janssen.  “ProDisc-C was designed to improve range of motion in the cervical spine, significantly reduce pain and restore disc height.”

The second patient, Rose, a 53 year old female accountant had been suffering with neck and upper extremity pain for quite some time that had affected her home life, working and overall quality of life.  She had gone to the emergency room and was provided with medication.  After an MRI was obtained of her cervical spine, it showed that she had a disc herniation compressing her spinal cord.  After treatment options were discussed with the patient, she too desired to proceed with the artificial disc replacement using the ProDisc-C.

Both surgeries were performed on January 16, 2008, and both patients pre-operative symptoms were gone the following day.  The patients were discharged from the surgery center on January 17, 2008 with minimal pain.  Both patients were contacted at home and reported to be doing well and when Matt was called on January 18, 2008, he stated he was doing work from his computer.

Dr. Janssen points out that only a doctor can advise a patient on treatment options, and a doctor and patient should decide together if disc replacement therapy and ProDisc-C is the right option.  Dr. Janssen was a primary investigator for ProDisc-C through the Spine Education and Research Institute. 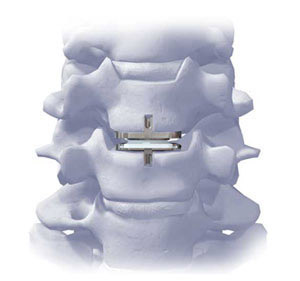 ProDisc-C Total Disc Replacement was approved by the US Food and Drug Administration on December 17, 2007 for intractable symptomatic cervical disc disease (SCDD), a condition that results from a degenerated, herniated, or bulging disc creating neck and or upper extremity pain or sometimes headaches due to the degenerative disc.

ProDisc-C has been designed to provide potential for normal range of motion in the cervical spine.  The implant was developed using the clincally proven ball and socket concept used in join replacement implants for over 40 years.  ProDisc-C is composed of three components: two cobalt chrome alloy (CoCrMo) endplates and an ultra-high molecular weight polyethylene (UHMWPE) inlay.

ProDisc-C Total Disc Replacement Surgery is intended to remove the diseased disc, provide the potential for normal motion in the affected vertebral segment, improve patient function, restore normal disc height and decompress the neurological structures.  The prospective randomized trial for ProDisc-C involved 13 medical centers across the country, including the Spine Education and Research Institute, with over 200 patients enrolled, treated and followed for two years.  All patients involved in the clinical trial will be followed up to five years until the last patient enrolled meets their 24 month follow-up.  If you have any questions, please call Nurse Practitioner Ruth Beckham at 720.540.7374 or e-mail her at beckhamr@spine-education.org.This e-mail address is being protected from spam bots, you need JavaScript enabled to view it.