Dr. Mark Flanigan Back on the Tennis Court After Robotic-Assisted Knee Replacement 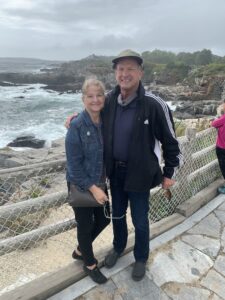 Recently retired family physician of 40 years Dr. Mark Flanigan enjoys traveling with wife, Nancy. The couple are pictured off the coast of Maine.

Dr. Mark Flanigan has summited all of Colorado’s 58 14,000-foot peaks, plus other mountains, too. In June 2020, he climbed 12,504-foot Mt. Ptarmigan. On the way down, he realized he might need to do something about his knees. “Going up was not so difficult, but it took me forever to get down,” says the recently retired physician. “You need your knees when you descend.”

The family physician of 40 years is also an avid tennis player. A couple of years ago, he began experiencing pain on the inside of his left knee. His stride became titled, and he had to drag his left leg while playing tennis. He could no longer jump up when serving. Upon examination by orthopedic surgeon and sports medicine specialist Dr. Oscar Noel, he learned that he had bone-on-bone osteoarthritis on the inside of his left knee.

“Dr. Noel said that I most likely damaged the cartilage or meniscus in my left knee when I slid into second base while playing baseball,” he says. “The degeneration process probably began then and has progressed during the past 40 years.”

Dr. Noel initially recommended conservative treatment for Dr. Flanigan’s condition, prescribing a custom brace, injections and physical therapy. As a result, Dr. Flanigan experienced less pain and could still play tennis, but not as competitively as he had previously. In early 2021, a man who had had a knee replacement soundly beat him during a few matches. At that point, he decided to explore a total knee replacement.

Benefits of the ROSA Robot for Total Knee Replacements

Dr. Flanigan returned to Dr. Noel. “He performs knee replacements using the ROSA robot to ensure perfect placement and balance of the knee implant,” says Dr. Flanigan. “The robot shows where the holes need to go and exactly where to drill and cut according to Dr. Noel’s plan.”

Dr. Flanigan also learned that Dr. Noel uses non-cemented implants for the new knee in appropriate situations. Because they are porous, bone can grow onto them. “With most early knee replacements, they put a spike down your tibia and femur,” says Dr. Flanigan. “But if you have good healthy bones, the porous-coated posts are a better choice because they save your bone marrow.”

Dr. Flanigan underwent a knee replacement by Dr. Noel on February 17, 2021, at North Suburban Medical Center. He chose local and spinal anesthesia, remaining awake during the procedure. “I’m pretty tough, and it’s better to go with local anesthesia as it eliminates the recovery time from anesthesia.”

He stayed one night at the hospital as his surgery was late in the afternoon. A physical therapist came the next day to educate him on post-surgical recovery and therapy. “Being a doctor, I already knew how to rehab. The key is to move the knee to the point of pain, then stop, ice it and do it again in six hours,” he says.

Back to Playing Tennis Again

In June, just four months after surgery, Dr. Flanigan began playing doubles tennis again. “Now, I don’t even feel the implant,” says Dr. Flanigan. “My knee does not hurt anymore, and I feel like I could climb any mountain. Last night, I played three sets of tennis at a club in Greeley, and I’m getting my power serve back, too.”

Dr. Noel advised against playing singles tennis due to the additional running on the new knee, but Dr. Flanigan admits that he will likely play some singles matches despite his surgeon’s advice.
Overall, Dr. Flanigan is very satisfied with his new knee. “Dr. Noel did a great job,” says Dr. Flanigan. “He could not have done better. He is very good at what he does.”

To determine if you are a candidate for robot-assisted knee surgery, call 303-287-2800 to schedule a consultation with Dr. Oscar Noel.

For more information about total knee replacement with the ROSA robot, click here!

Editor’s Note: On November 12, Dr. Flanigan underwent minimally invasive carpal tunnel surgery on his right wrist by Dr. Noel. He reported that his hand felt better immediately after the procedure, and he did not require any medication.