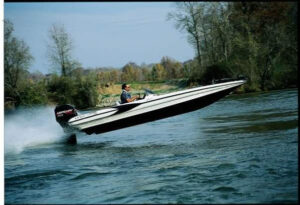 Since 1994, Mercury senior application product engineer Dean Lambert has worked with leading boat builders in the Bass world. Lambert was photographed by Bass and Walley Boats magazine, testing a boat, back in 1999. Fifteen minutes later, he landed hard, breaking his neck. As a result, he had his first spine (neck) fusion.

Boat testing can be dangerous even for a highly experienced Mercury Marine senior product application engineer like Dean Lambert. “I’ve logged hundreds, if not thousands, of hours behind the wheel of all types of boats,” says Lambert. “However, sometimes, even with the best of planning, bad things happen in the blink of an eye.”

Back in 1999, while Lambert was testing a Bass boat, driving fast and getting some air, he hit a high wake. The boat landed flat on its bottom, snapping Lambert’s neck. “At speeds over 70 miles per hour, water gets hard, and landing is like hitting concrete,” says Lambert, who did not know he had broken his neck until visiting a physician two weeks later. “At first, my neck was only a little sore, but two weeks later, it was killing me,” he says. He then visited a spine surgeon in Springfield, Missouri, where he lives, and had fusion surgery after his condition had further worsened.

24/ Back Pain After Fusion Surgery 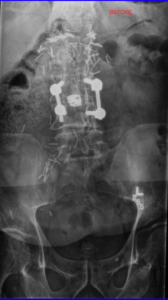 Pictured is an x-ray taken In January 2019 after Dean Lambert had spinal fusion at his L-3 and L-4 vertebra by a surgeon in Springfield, MO. The surgery relieved his sciatica pain but left him with back pain 24 hours a day from that day on.

Years later, he began having sciatica pain, which also grew worse. Lambert returned to the same surgeon who had performed his neck fusion. In January 2019, the physician fused his L-3 and L-4 vertebrae in his lumbar spine. The procedure relieved his sciatica pain, but from that day on, Lambert had back pain 24 hours a day.

His doctor referred him to a pain management clinic where he received a gamut of treatments, including nerve blocks. None of the procedures helped. By summer 2019, Lambert had lost hope that he would ever get better. Despite the constant pain, though, the Mercury engineer continued to drive boats, set up engines, and prepare for the release of new engines to the marketplace.

An Introduction to Dr. Michael Janssen

During summer 2020, Lambert traveled to assist a Mercury co-worker, Michael Griffiths, who has the same job as Lambert, but in the company’s High-Performance Division. Griffiths saw Lambert struggling. He said, “Hey Dude, I can’t stand seeing you in that kind of pain,” recalls Lambert. That same summer, Griffiths called Lambert to help test a high-performance boat capable of running over 137 miles per hour. After the two men set up the boat with that day’s tests, Griffiths said, “By the way, a buddy of mine lives here. I want to introduce you to him.” Lambert and Griffiths made a quick run to the introduction as the boat cruised comfortably at triple digits. 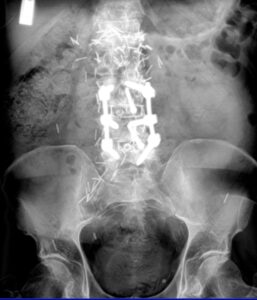 Pictured is an x-ray taken after Lambert underwent a two-phase spinal reconstruction surgery by Dr. Michael Janssen in March. Dr. Janssen removed the old hardware and placed new screws and rods from L-3 to L-5. The next day, Dr. Janssen removed a spacing device from the 2019 surgery and placed spacers and bone in its place. Within 10 days post-surgery, Lambert was pain-free without medication for the first time in more than five years.

At Lake of the Ozarks, Griffiths introduced Lambert to Dr. Michael Janssen, a spine surgeon and founder of the Center for Spine and Orthopedics in Colorado. “I showed Dr. Janssen the x-rays on my phone,” says Lambert. “His response was that he had not seen fusion surgery done that way in 20 years.” Lambert flew to Denver for an appointment with Dr. Janssen and a general surgeon, Dr. Doru Georgescu. “Dr. Janssen was very optimistic about being able to help me,” says Lambert. “Dr. Georgescu was not nearly as optimistic.”

Both surgeons had reviewed Lambert’s complex case, x-rays, and medical history. Lambert had had testicular cancer surgery 30 years ago. The surgeon had removed several lymph nodes near Lambert’s spine, creating scar tissue that they would have to cut to reach the spine. Additionally, the ureter between Lambert’s bladder and kidney was buried in the scar tissue. The two Denver surgeons would not be able to see it as they were cutting through the scar tissue without an additional procedure. Thus, Dr. Jeremy Weiss, a urologist, joined the team to implant ureteral stents that would enable Dr. Janssen and Dr. Georgescu to see the ureter.

“This was a very complex case on many levels,” says Dr. Janssen. “The fusion hardware in Lambert’s lower back was digging into muscle and moving back and forth. The screws were protruding three-quarters of an inch and were very loose. There was no bone fusion, and the angle was wrong. However, I strongly believed that we could perform surgery that would greatly improve Dean’s quality of life.”

In Lambert’s case, Dr. Janssen recommended a two-phase spinal reconstruction surgery, and Lambert chose to move forward with the procedure. On March 2, Dr. Janssen removed the old hardware and placed new screws and rods from L3-5. The next day, Dr. Janssen did a second surgery through Lambert’s abdomen to remove a spacing device from the previous back surgery, placing spacers and bone in their place. Three days later, Lambert left the hospital and flew home on March 7.

Standing Straight and Tall Without Pain 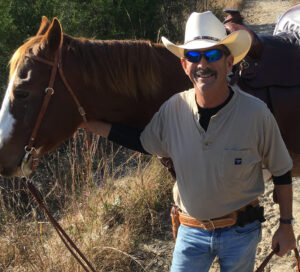 Lambert was back in the saddle on his horse, Ranger, by June.

“When I got home, the first thing my son and daughter noticed was that I was standing straight and tall,” says Lambert. “Dr. Janssen corrected my spine by almost 30 degrees.” By March 13, Lambert was pain-free without medication for the first time in more than five years.

After his surgery, Lambert carefully followed Dr. Janssen’s instructions. He was initially on work restriction and worked at home for awhile. “My son and daughter were amazed that I was able to sit still, but I would not want to do anything to screw up my results,” says Lambert.

A few weeks after surgery, Lambert visited his personal physician who said that everything looked really good. “My swelling had gone down down, and he said that my back looked fantastic,” says Lambert. The 63-year-old, who lives on a small farm in Missouri, began hoping to get the green light to ride his horses again soon. “I had not ridden my horses or Harley motorcycle in more than a year because I paid for it afterward,” he says. “I had become very limited in what I could do. Now, there was light at the end of the tunnel.”

“My goal with surgery was to reduce Dean’s pain, optimize his ability to function, and get him back to work and the activities he enjoys,” says Dr. Janssen. “That is what I would want.”

Back to Living Life Again

On April 26, Lambert returned to work. By June, he was back to riding his motorcycles and Ranger, his horse. “I will forever be in debt to all of the staff at the Center for Spine and Orthopedics as well as North Suburban Medical Center,” he says.

Lambert’s advice to others struggling with back pain is to visit Dr. Janssen. “I cannot recommend him enough. I feel incredible. So many prayers have been answered,” he says. “I owe Dr. Janssen and everyone involved a great deal of gratitude. Everyone was absolutely phenomenal.”