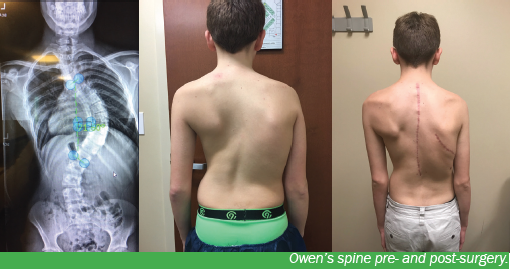 At only 13-years of age, Owen DeLaCastro had been suffering for many years from a worsening spinal deformity, termed “Adolescent Idiopathic Scoliosis” (AIS). Owen was having increasing trouble walking long distances and he was unable to run or exercise due to chronic back pain. His overall health was declining and his scoliosis was beginning to cause serious complications. Owen and his parents decided that it was time to act. They reached out to the one orthopedic spine surgeon they had known and trusted for a long time, Dr. Mike Janssen, at the Center for Spine and Orthopedics.

“From the moment we began working with Dr. Janssen and the whole orthopedic spine surgery team at North Suburban, we knew Owen was in great hands!” said Owen’s father, Jon DeLaCastro.

Owen’s progressive extent of scoliotic spine deformity was associated with significant risks for intraoperative and perioperative complications, including bleeding, spinal cord or nerve injury, and postoperative infection. Dr. Janssen and his team assured a diligent approach towards compassionate shared decision-making with Owen and his parents prior to surgery. They were also introduced to the anesthesiologists and to the entire team on the pediatric floor that would take care of Owen before and after surgery.

“Owen’s surgical team really made him feel special,” said his mother, Dana Klaus. “On the first day they met him, they learned that he really likes comic books and that he’s a big fan of the character Zelda. When Owen woke up from surgery, the nursing staff had hand-sewn a Zelda pillowcase for his bed in his recovery room. They paid attention to every detail.”

Dr. Janssen performed a staged “front-and-back” spinal correction procedure to restore the alignment of Owen’s spine. In spite of the complexity of this high-risk procedure, the surgery was performed safely without much blood loss and without the need for postoperative transfer to the intensive care unit for monitoring. Thanks to the outstanding nursing care on our pediatric unit, Owen recovered extremely fast from the extensive surgical procedure. He was successfully mobilized by our PT/OT team at North Suburban and discharged within just a few days after surgery.

A few weeks after discharge from the hospital, Owen summarized the early success of his recovery: “I can do everything I want to do now! I can walk, I can run, I’m active again in the choir and the middle school band where I play the saxophone.” 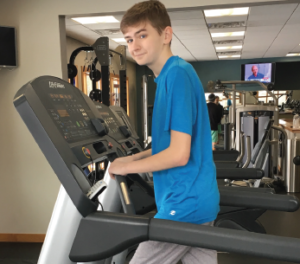 As a testimony of his restored activity level, Owen sent Dr. Janssen this impressive picture of him exercising on a treadmill.

“The best thing about Dr. Janssen was that he was comforting and gave me a lot of information throughout my hospital stay. He wanted me to understand what was happening and why. He really cared about me personally and he is still texting my parents many months after the surgery to ask how I’m doing,” said Owen with great gratitude.

This article was published in the August edition of North Suburban Medical Center’s Physician Newsletter. Click here to visit their website and learn more.