Chappell’s ‘Surreal’ Return From Back Surgery 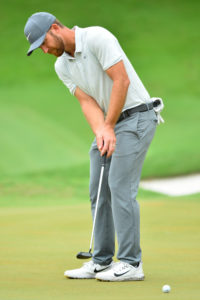 Many are raving about Kevin Chappell’s incredible comeback from back surgery. After consulting several doctors, he made the decision to have a microdiscectomy and laminectomy at the L5-S1, which is where the lumbar spine ends and the sacral spine begins. Not only is he out of recovery, but Kevin shot a 59 at his first PGA tournament since the surgery. Read the article below for more information. While Chappell did not conduct his surgery at CSO, we followed his story and his recovery to encourage patients to seek care if experiencing any sort of back pain. For more information on the treatments we offer, click here.

A 59 is among the rarest feats in golf. In fact, only 10 men have ever broken 60, one of whom inexplicably did it twice.

But to understand the significance of the 59 that Kevin Chappell shot on Friday during the second round of A Military Tribute at The Greenbrier, you have to go back to Nov. 28 of last year when he was lying on an operating table having surgery on his lower back.

He’d tried to mask the discomfort for nearly five years, taking anti-inflammatories and pain-killers and undergoing physical therapy just to get him through another day or another tournament. On the way home from the 2018 Mayakoba Golf Classic, though, Chappell was physically spent. He couldn’t even make it to baggage claim after he landed in Phoenix.

“The adrenaline had come out of my body and I couldn’t do it anymore,” he said.

Just before Thanksgiving, things got worse. Chappell lost the feeling in his right leg. He couldn’t walk. So, after consulting several doctors, he made the decision to have a microdiscectomy and laminectomy at the L5-S1, which is where the lumbar spine ends and the sacral spine begins.

The Greenbrier is the first PGA TOUR event he’s played since the surgery. And in his second round Chappell shot a 59, the Holy Grail of the game. He tied the TOUR record with nine straight birdies, too, and will start the third round at The Old White TPC just three strokes off the lead.

“I just couldn’t feel more lucky to be here right now,” Chappell said. “Ten months ago, I was laying on my couch and couldn’t get up. So many people sacrificed to get me here, especially my family. A lot of people believed in me, put in a lot of hard work.

“To go out and have my first start back on the PGA TOUR to shoot 59, get myself in contention going into the weekend, I just couldn’t be more proud of myself right now.”

Chappell’s round of 11 birdies came nearly four months to the day after he was given the go-ahead to tee it up again – but for just nine holes. In the months following the surgery, rehab essentially became his job and he followed the orders of the doctors and therapists to the letter.

In March, though, Chappell finally got the go-ahead to start chipping and putting. Wedges came shortly afterwards – he hit 12 the first week, 15 the second, 20 the third and so on. As much as he might have wanted to, he didn’t do more.

Chappell finally played those first nine holes on May 11 – and as much as he would have liked to go on, that was all he could do.

Chappell, the former NCAA champion, the winner of the 2017 Valero Open, didn’t doubt that he would play golf for a living again. He played a couple of Korn Ferry Tour events in August to get his feet wet. He has job security in the form of a major medical extension with 23 events to earn 268 FedExCup points to retain his TOUR card.

“But to be able to compete at the level I knew I could do it at, I questioned that,” Chappell said. “But I think this certainly validates that my game is there. I still possess that ability. Through a lot of the hard work and passion and focus it’s — you know, it’s there.”

The 59 – the second at The Old White TPC since the tournament began in 2010 — was Chappell’s lowest score on TOUR by three strokes, and it gives him a very real shot at his second TOUR win after a 10-month layoff.

“What a story that would be,” he said.

Of course, Chappell knows a lot can happen over the next two rounds. He knows better than to get ahead of himself, too.

Besides, Friday was a day to savor. He wanted to share it with his wife, Elizabeth, who walked his first nine holes before going to pick up their two young children, Wyatt and Collins, at day care, as well as the rest of their family and friends.

“Those three that made the biggest sacrifices are here,” Chappell said with a smile. “My kids will have no idea what dad did today, and they didn’t know what dad shot yesterday either. I wouldn’t have it any other way.

“I’ll go home and get a big hug and probably shed a tear or two with my wife.”

And get back to work on Saturday.