The Disc Doesn’t Fall Far from the Tree 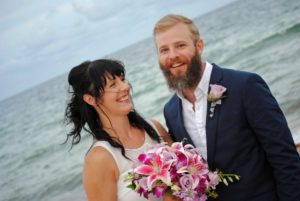 Michael and his wife, Sarah, on their wedding day. The couple flew to Denver together for Michael’s December 16 surgery.

Michael Duggan came to CSO after recurring back pain was having an impact on his life. Michael’s father, Ron, was also experiencing pain as well, and both, with the help of Dr. Michael Janssen, had same-day spine surgery to relieve their acute back pain. Read below for more on Michael and Ron’s story. For more information on the treatments we offer at the Center for Spine and Orthopedics, click here!

A junior high school football injury set Michael Duggan on a path of life-long back problems. “I was 14 years old. We were doing a practice drill. Our coach gave one of our biggest guys a chance to carry the ball. He asked for volunteers to try to tackle him,” says Michael. “I was a small guy, but I volunteered.”

At barely 100 pounds, Michael chased down his more than 200-pound teammate and brought him down. “The moment I tackled him, I felt something pop in my back. The pain ran down my leg,” explains Michael. “I didn’t want anyone to know so I continued playing for two more weeks.”

Eventually, Michael went to see a local doctor and had an MRI. He was diagnosed with a herniated disk. For the next 12 years, he tried conservative treatment, including physical therapy, steroid injections, dry needling, a MedX machine, and an ablation procedure at his L5-S1 disc. Nothing helped.

Then, he met Dr. Michael Janssen while he was working as the manager of Captain Ron’s Bar and Grill in Sunrise Beach, Missouri. “Dr. Janssen noticed me walking odd, and that it was clearly a back issue,” says Michael. “He came up to my office and explained to me how backs work in terms I could understand.” By then, Michael was 26 years old.

Dr. Janssen recommended additional physical therapy, yoga, and other conservative treatments to try to get the disc to move back into place. However, all conservative treatment failed. Finally, in January 2013, Michael had discectomy surgery by Dr. Janssen. “Surgery is the only thing that helped. I instantly felt better after my surgery,” says Michael. “I’m sorry I waited so long. My pain was an 8 or 9 before surgery. It was a “2” afterward.”

Though he felt much better, Michael continued to injure his sciatic nerve, and his pain gradually grew worse once again. During that time, he moved to Kansas City, where he managed a restaurant until one day when he took a step backward and fell.

He went to see Dr. Janssen for an examination, learning that he had very little disc left in his lower back. Dr. Janssen wanted to do a total disc replacement, but Michael’s insurance company, Humana, denied the request. For almost three years, Michael fought their decision, and Dr. Janssen supported him. “He wrote them a long letter, saying that they were denying me my quality of life.”

Humana continuously put Michael off, giving him non-working fax numbers and placing him on hold for a day. As a result, he wound up in the ER often. For that reason, Humana finally approved him for spinal fusion. “Dr. Janssen told me that spinal fusion would put pressure on the disc above L-5, and he was right,” says Michael, who went forward with fusion surgery at that time.

The surgery helped. Michael felt “amazing” until July 2017 and that October, his pain was worse. He went back to Dr. Janssen, learning that his L4-L5 disc had broken and a piece of it was lodged in the pocket of his spine. Michael was back in a wheelchair and on bed rest once again.

During that time, Michael had moved to a desk job in the Human Resources Department of the hotel where he worked. He was doing okay until he injured himself over a weekend.

Dr. Janssen reviewed Michael’s latest MRI. His diagnosis included a disk herniation at L4 & L5, radiculopathy and facet arthropathy. He scheduled Michael for decompression surgery at L-4 and L-5 on December 16. Prior to Michael’s surgery, his highly active father, Ron, also began having back pain. 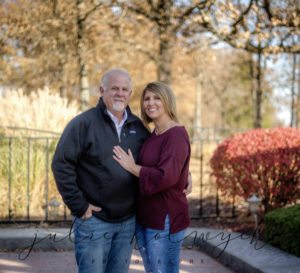 Ron Duggan stays busy with six businesses – restaurants, a title insurance company, and a farm. In his spare time, Ron coaches high school varsity basketball and a seventh-grade girls’ traveling basketball team. He had had two knee replacements before his back pain began. “We went to a Chief’s game in November,” recalls Michael. “When Dad described his pain, I told him it sounded like sciatica and advised him to call Dr. Janssen.”

Dr. Janssen reviewed Ron’s MRI, discovering that Ron had a herniated disc wrapped around the nerve. He scheduled Michael’s father’s surgery on Monday, December 16—the same day as his son would have decompression surgery.

Prior to surgery, Ron describes himself as a “walking zombie.” His pain came on suddenly and became so severe that he spent most of the night walking around his house. He was lucky to sleep two hours a night and wasn’t able to do much at his office or while coaching basketball. In fact, his pain affected all aspects of his life and worsened during the two-month period after it first began.

By the time Ron arrived at the surgery center in Denver, his pain was shooting up to a “10” whenever he moved. The good news was that surgery gave him instant relief from the pain running down his leg. By the next morning, he was sitting on the edge of his bed, which he could not do the previous day. He was discharged from the surgery center that morning and spent one night at a hotel before flying home on Wednesday. 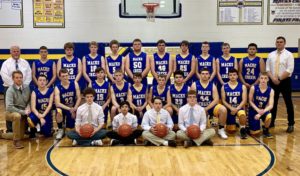 “Doc did an amazing job,” says Ron. In fact, he was able to be at his varsity basketball team’s opening game that Thursday night.

Dr. Janssen told Ron to give his body six weeks to heal. Until then, no lifting or bending down to lift, but he could walk. By the end of the first week, he was walking a mile each day.

Now, Ron is back to coaching again, taking care of the animals on his farm, and he looks forward to summer at the Lake of the Ozarks, where he owns Captain Ron’s Bar and Grill. “We host the annual shoot out at Lake of the Ozarks,” says Ron. “We enjoy it there and look forward to seeing Doc (Janssen) there, too.”

“I am so thankful that Doc was able to get me in for surgery right away,” he says. “I was never nervous. It’s very comforting to have a physician that I also call a friend.”

Like his father, Michael has also recovered post-surgery, but due to the complexity of his nerve decompression procedure, not as quickly as his father or as with his previous surgeries. Though he received relief from his sciatic nerve and lumbar pain, he experienced greater post-surgical pain. However, 11 days later, he was feeling much better.

Michael returned to work on December 30. He will wear a brace at work until mid-February and then check in with Dr. Janssen for further instructions. 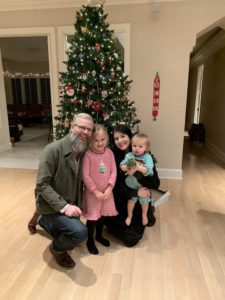 Michael and Sarah Duggan celebrated Christmas with Michael’s nieces less than two weeks after he had spine surgery on December 16.

As the New Year gets underway, both father and son are grateful for Dr. Janssen’s expertise and the quality of their lives that he’s given back to them.

“Doc has been so good to me and my family over the years.  I never want anyone to touch my spine other than him, especially knowing that disc degeneration is something I may end up living with for the rest of my life. Thanks to him, I truly have a good quality of life – personally and professionally,” says Michael. “Without Doc’s care, I very much don’t believe I would be as happy as I am today. The Duggan family will be forever grateful to Doc Janssen.”

Does Lower Back Disease Run in Families?

Not only did Michael’s father experience back pain, but his mother also had problems. She had spondylolysis, which was thought to be triggered by her pregnancy. In her case, her spine fused itself without surgery, unlike Michael’s father.

According to a relatively new study published by the Journal of Bone and Joint Surgery, symptomatic lumbar disc disease, a condition caused by degeneration or herniation of the discs of the lower spine, may be inherited.

“Previous studies, including studies of twin siblings and subsequent genetic marker studies, have suggested a genetic predisposition for the development of symptomatic lumbar disc disease but have been limited by a small number of patients,” noted study author Alpesh A. Patel, MD FACS, assistant professor of orthopedic surgery at the University of Utah School of Medicine. “The results of this study provide evidence-based on a population of more than 2 million people, indicating that there is likely a genetic component in the development of this disease. Additionally, the factors that differentiate asymptomatic disc from a non-painful disc may also be affected by genetics.”