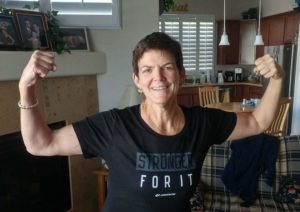 Donna earned her “stronger for it” shirt for attending 150 Jazzercise classes in 2017.

At age 14, Donna Spearman had a stainless steel Harrington rod implanted along her spinal column to treat scoliosis. At that time, her spine’s 60 degree curvature was progressing rapidly. During the procedure, a major portion of her spine was fused, and she was left with only two functioning lumbar discs at the base of her spine.

Though not an athlete, Donna continued to lead an active life, particularly after moving from Chicago to Colorado in 1988. “I learned to ski and really enjoyed it,” she says. Six years later, when her children were ages 3 and 5, she noticed that her spine became L-shaped after sitting awhile, and it was difficult for her to straighten up when she walked. Her condition grew worse over time. “I was constantly bent over. I looked like my 70-year old grandparents rather than a person in my late 30s,” she says. “I was also in pain.” 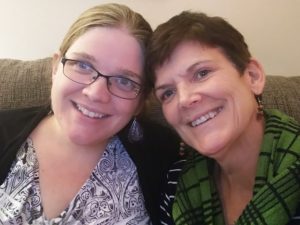 Donna Spearman and daughter Emily have both enjoyed full and active lives since scoliosis-related spine surgery by Dr. Janssen.

Donna went to see her primary care physician, Dr. James Yeash, who referred her to Dr. Michael Janssen, a spine surgeon at the Center for Spine and Orthopedics. “Dr. Yeash told me that Dr. Janssen was the person who could help me,” says Donna. She saw Dr. Janssen and had x-rays taken of her spine.

“He looked at my x-rays thoughtfully and became very quiet,” she recalls. “He said, ‘Unfortunately, you are one of the people who has developed flat-back syndrome as a result of your Harrington rod.’” Dr. Janssen sent Donna for a discogram to determine how severe the degeneration was in her two functional spinal discs. “As they injected the dye, they asked about my pain level, “says Donna. “It was the only time in my life that I said it was an 11 on a scale of 1 to 10.”

During a 14-hour surgery, Donna’s mother kept a written log of the hourly communications from the operating room to family and friends in the waiting room, while Dr. Yeash scrubbed in for support. Ten hours into the operation, Dr. Janssen took an x-ray and determined that the alignment was not exactly as he wanted, so he operated four more hours to make sure that it was perfect.

“From the get go, he told me that he would stay with me and do whatever it took to make the procedure work. He was good to his word… I never imagined it would last 14 hours, though.”

For three days, Donna stayed in ICU at St. Anthony’s Hospital, where Dr. Janssen founded the facility’s spine program. After four more days in the main hospital, Donna went home with a custom back brace to immobilize the discs during the healing process. Per Dr. Janssen’s instructions, she walked two miles a day. “At first, I could only manage about a six-inch stride, so I walked a quarter mile eight times a day, and I never missed,” she says. “After three months, when I got the back brace off, I was pretty much good to go.”

After her recovery, Donna returned to the activities that she enjoys most, except for running and skiing. “It wasn’t worth the risk of falling and losing my mobility,” she explains. Instead, she walks at a fast pace—around four miles an hour – hikes more and does Jazzercise daily, along with weight lifting. She and her husband, Steve, travel all over the world—Wales, England, Scandinavia, Switzerland, the Caribbean and more. She even took up snorkeling.

Each December, Donna Spearman hangs the Harrington rod that Dr. Janssen removed from her spine on her Christmas tree as a reminder of her journey.

As a reminder of her journey, she hangs her Harrington rod, decorated with a red bow, upon her Christmas tree each year. “As I hang that ornament on the tree, I am reminded of Dr. Janssen’s important contributions to my life—the ability to stand tall, move easily, stay fit, carry my grandchildren, pursue worldwide adventures and much more, all without pain,” says Donna.

And although she didn’t know it that first Christmas, Dr. Janssen would also enable Donna’s daughter to live a full life, too, unhampered by the detrimental effects of scoliosis. 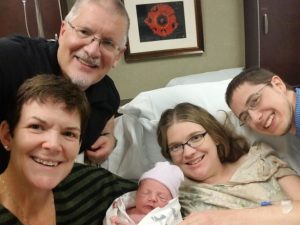 As scoliosis can run in the family, Donna’s daughter, Emily, was also diagnosed with the condition when she was 10 years old. After having her evaluated at Children’s Hospital, Donna and her husband decided to take her to Dr. Janssen. “I trusted him so much,” she says. “And he had such a good way of talking to Emily about her life. He really engaged her, and it was her decision to have surgery.”

In 2003, when Emily was 15, Dr. Janssen performed a spinal fusion to correct her curvature. Since then, she has been pain-free.  She is a mother to an active two year-old and a newborn daughter who arrived on December 30. In addition to being a mother, Emily also serves as a United Methodist pastor in Nebraska.

In 2009, Donna returned to see Dr. Janssen after falling on her icy driveway while taking out the trash. She had injured two discs in her neck. Dr. Janssen performed a cervical fusion to relieve the pain and restore her arm’s function, which had been lost as a result of her neck injury.

Then, after retiring two years ago from a 34-year career as a librarian, Donna saw Dr. Janssen for low back pain this past November. She had fallen the previous year, and her sacroiliac joint had become inflamed. To reduce the pain and inflammation, Dr. Janssen gave her a cortisone injection during her appointment. Following that visit, Donna reflected back on her experience with Dr. Janssen, spanning almost 25 years, and wrote him a letter, saying:

“I turned 59 years old this past October and have begun to move through my 60th year of life. I am attempting to live it to its fullest and fill it with the best possible adventures and accomplishments. Know that as I welcome Emily’s new child into the world in January, and as I walk about London for a week in February, and as I embark on my solo walking adventure through the Swiss Alps in July (and as I hike here in Colorado with my son, Colton, to prepare for that), and as I journey through Israel in October and as I Jazzercise to stay fit throughout the year, I will be giving thanks for the quality of life and the extra layers of richness that your competent and caring contributions have added for me.”
—Donna Spearman, Spine Patient

About Scoliosis & the Harrington Rod

Scoliosis, or curvature of the spine, affects 2 to 3 percent of Americans, totaling about 6 million people. The condition most often appears between ages 10 and 15 and affects about 10 percent of all adolescents; only about 1 percent require treatment.

Between 1964 and 2000, the standard treatment for scoliosis was fusion of the vertebrae in the curved part of the spine and placement of a stainless steel rod, called a Harrington rod, which attached to the vertebrae to allow the fused spine to heal. Complications, such as Flat Back Syndrome, can occur after Harrington rod placement.

For more information about the Harrington Rod, visit https://www.clear-institute.org/blog/harrington-rod/