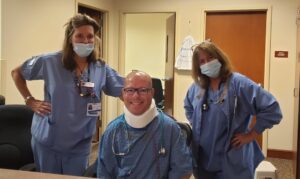 Chris Caro received outstanding care, not only from Dr. Janssen, but also from North Metro Surgery Center nurses. Pictured, L-R, are Cindy and Tracy with Caro following his surgery.

Jefferson County Deputy Sheriff Chris Caro is not sure why his neck pain and arm weakness began. He does not know if it runs in his family or if it was the result of a 2002 auto accident when another car t-boned his vehicle while he was on duty. Whatever the cause, six years later, his neck pain began along with weakness in his left arm.

Caro, who is left-handed, was concerned that his neck issues were negatively impacting his ability to safely perform his job duties. He explained the situation to his sergeant and then visited his primary care physician.

His doctor referred him to a pain management specialist, who subsequently referred him to a massage therapist. Later, he received physical therapy to meet the requirements of insurance protocols. “The worst part of 2008 was being bounced around to multiple providers,” says Caro. “None of them addressed my issue.”

Finally, he visited the Center for Spine and Orthopedics (CSO). On his first visit, he saw Ruth Beckham, NP, who did an initial evaluation and ordered an MRI. Dr. Michael Janssen, spine surgeon and CSO founder, reviewed the imaging results, which showed degenerative disc disease in Caro’s C2-C3 cervical disc. Dr. Janssen recommended fusion surgery, and Caro agreed to move forward with the procedure. Afterward, Caro regained strength, and the numbness and tingling in his left arm went away. Following physical therapy, he returned to work.

The procedure enabled Caro to continue working as a cop for 11 more years, while also enjoying favorite hobbies, such as kayaking. Then, in 2021, his previous symptoms returned.

Caro went back to Dr. Janssen’s office. By then, he knew the drill. Dr. Janssen’s physician assistant, Rachel Cengia, performed an exam and ordered a new MRI. This time, the results showed a progressive increase in upper extremity symptoms and severe degenerative disc disease from C6-C7-T1. “Dr. Janssen reviewed my MRI results and told me that we were looking at the C-7 and T-I discs now,” says Caro. “He said that my next surgery would be much more in-depth than the previous two surgeries.”

On September 20, Caro underwent surgery at the North Metro Surgery Center adjacent to the Center for Spine and Orthopedics. During surgery, Dr. Janssen performed a C6-7 and C7-T1 anterior cervical diskectomy and fusion. “It was a very difficult dissection,” says Dr. Janssen. “But excellent stability was gained.” Before leaving the surgery center the following day, he talked with Dr. Janssen about his future. Janssen explained that Caro would probably not be able to return to his career as a law enforcement officer this time. 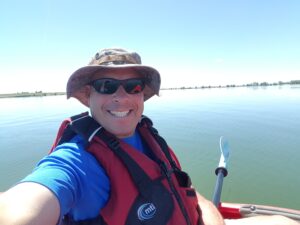 Caro looks forward to kayaking again after having to stop previously due to upper extremity weakness.

Caro was okay with the decision not to return to law enforcement. “The nature of the job had changed significantly since I joined patrol in 2000. It had become increasingly more dangerous,” he says. “I knew the surgery put me at greater risk of injury, and I didn’t want to risk my health and my future.”

After 20 years of patrol duty, Caro will most miss his co-workers and the comradery.

Recently, Caro and his wife moved to Pennsylvania to be closer to family. Now settled, he has begun seeking a new career where he will also have the opportunity to serve others. 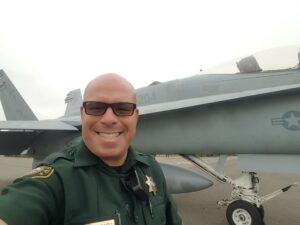 Caro invested more than 20 years of his career in law enforcement and says that he will greatly miss his colleagues after being unable to return to patrol duty after a third surgery in 2021. Two previous surgeries by Dr. Michael Janssen enabled him to serve from 2008 to 2021 prior to his retirement.

A Tribute to Caro’s Service

Dr. Janssen, Rachel and the team at the Center of Spine and Orthopedics appreciate Caro’s service to our community and his willingness to risk his well-being for the sake of others. “It’s a privilege to help a public servant like Chris,” says Dr. Janssen. “We wish him the best in his future career and know he will continue to be an asset in his service to others.”

Advice for Those With Neck Pain

Caro advises others who start to feel neck pain and arm weakness not to ignore it. “Get help right away,” he advises. “The hardest thing at first was being bounced around to multiple providers, but finally I got to the right place. Dr. Janssen and Rachel took a personal interest in helping me and went above and beyond to assist me with paperwork and more.”