Your Surgeon’s Childhood Hobbies May Affect Your Health

With technology becoming increasingly popular, it seems to take a toll on what is really important. Art and other hands-on activities help with the development of hand eye coordination. This becomes important when it comes to surgeons and the surgeries they perform. Read the article below to learn more about the effects of the decline in dexterity and how accomplishing important tasks is changing in students.

Could you tie a series of square knots around the neck of a teaspoon without, even slightly, moving the teaspoon? How about using tweezers to extract a grape from inside a roll of toilet paper, without piercing the grape’s skin or touching the sides of the roll? Aspiring surgeons should have the dexterity to accomplish such tasks. But increasingly, they don’t.

Faculty members at medical schools in the United States and Britain have noticed a marked decline in the manual dexterity of students and residents. Some say it’s because of fewer hands-on courses in primary and secondary schools — shop class, home economics, drawing, painting and music. Others blame too much time spent tapping and swiping screens rather than doing things that develop fine motor control like woodworking, model building and needlework. While clumsiness is a growing concern in medical schools, the extent and permanence of the problem are unclear.

“There is a language of touch that is easy to overlook or ignore,” said Dr. Roger Kneebone, professor of surgical education at Imperial College London. “You know if someone has learned French or Chinese because it’s very obvious, but the language of touch is harder to recognize.” And just like verbal language, he thinks it’s easier to acquire when you’re young: “It’s much more difficult to get it when you’re 24, 25 or 26 than when you’re 4, 5 or 6.”

Dr. Robert Spetzler, former president and chief executive of the Barrow Neurological Institute in Phoenix, agreed. “Think about the difference between someone who has learned to ski when they were a little kid and someone who spent a long time, perhaps even the same amount of time, skiing as an adult,” he said. “That elegance that you learn when very young, doing that sport, can never be equaled by an adult learning how to ski.”

Dr. Spetzler earned a reputation as a virtuosic brain surgeon during his more than 40 years operating. He said he developed his dexterity as a child by playing the piano. And he began performing surgery in high school — on gerbils. All of them survived.

“The sooner you begin doing a physical, repetitive task, the more ingrained and instinctive that motor skill becomes,” Dr. Spetzler said. “What makes a great surgeon is unrelenting practice.”

Indeed, the scientific literature is replete with studies that show a correlation between surgeons’ experience and patient outcomes. The more procedures a surgeon performs, the more likely their patients will have shorter hospital stays, suffer fewer complications and, most important, survive.

That creates a problem for today’s medical students, particularly those lacking dexterity, because of rules on how much they can work. The introduction of the maximum 80-hour workweek in 2003 had the unintended consequence of limiting surgical residents’ availability to participate in operations and refine their skills. It’s estimated that work restrictions cause residents to lose a year’s worth of experience. 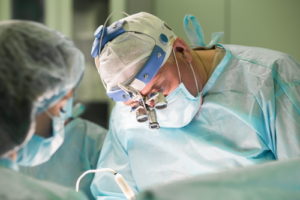 “When I trained, good or bad, I worked about 120 hours a week. That was just expected,” said Dr. Thomas Scalea, a trauma surgeon and professor at the University of Maryland School of Medicine in Baltimore. “Today the average resident finishes with around 900 operative cases. I finished with twice as many.”

It’s also true that there are now more kinds of surgery to learn. While surgery used to require cutting the patient open, advances in technology have created more minimally invasive procedures using scopes and programmable instruments like the Gamma Knife, which uses focused radiation to destroy tumors rather than having to remove them.

Some of the newer technologies demand less manual dexterity and more of the kinds of skills and reflexes one acquires playing video games. But nevertheless, they require repetition and experience to do well.

“Medical students today have to be trained much more broadly on a wider range of methods than earlier generations,” said Dr. Douglas Tyler, professor and chairman of the department of surgery at the University of Texas Medical Branch in Galveston. “Because of the magnitude of knowledge and all the different technologies, now people more commonly go into fellowships, picking one area to specialize in,” so they can build confidence and competence.

But even if the procedure is not one that requires exceptionally fine motor skills, some still worry that medical students who are “all thumbs” — meaning their primary experience working with their hands is thumb-typing on their phones — may be deficient in ways other than just dexterity.

Dr. Maria Siemionow, a transplant surgeon at the University of Illinois College of Medicine in Chicago, recalls spending hours in her youth crocheting sweaters and also cutting out pictures and words in magazines and gluing them into elaborate collages. Such creative endeavors not only develop dexterity, she said, but also require a three-dimensional imagination, planning, patience and precision.

“If you see the little stitch is pulled too tight or you glued something improperly, you have to repeat and learn how to do better,” she said. “It’s these basic skills you also need to be a surgeon.”

Dr. Siemionow led the team of surgeons that conducted the first near-total face transplant in 2008 and spends much of her time now conducting research and training residents in how to perform intricate surgical procedures under a microscope. She said it’s very easy to tell who is not going to make it: “They are already in their residencies and yet, they don’t have a good feeling about their hands and you observe them getting frustrated, they are impatient, there is blood all over.”

She believes students can be trained to be great surgeons, but they need to come in with baseline skills. Dr. Siemionow said that as a child growing up in Poland, she was always making things in school. “From what I see, it’s a wake up call, that schools need to do more to encourage creativity and three-dimensional thinking,” she said.

She and colleagues also wonder if it may also be time to reconsider how medical students are selected for surgical programs when at least 30 percent to 50 percent of complications from surgical procedures are potentially avoidable. The current system picks surgical trainees based on intellectual capacity. “We look at their grades and their test scores, their productivity, like writing papers and doing research, but the reality of being a good surgeon has nothing to do with that,” said Dr. Michael Lawton, who succeeded Dr. Spetzler as president and chief executive of Barrow Neurological Institute.

“What matters is how they handle the instruments and what kind of touch they have with tissues, as well as how they react and adapt when under stress in the operating room.”