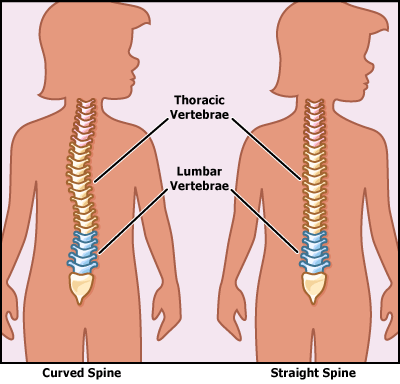 Every person’s spine can curve. A certain amount of curvature is necessary for us to balance, move, and walk properly. But 3 people out of 100 have scoliosis, a condition that causes the spine to curve from side to side.

No one knows what causes the most common form of scoliosis, called idiopathic scoliosis. The condition can be hereditary, so a child who has scoliosis might have family members who have it. Girls are much more prone to developing severe cases of spinal curvature than boys are.

Scoliosis can develop very gradually, in most cases it isn’t diagnosed until a child is between 10 and 14 years old. Most cases of scoliosis don’t require treatment, but even when they do, kids can usually resume an active life after treatment.

Most of the time, scoliosis is mild enough that it doesn’t affect a child’s life and requires no medical treatment. In some cases, doctors will have a child with scoliosis wear a back brace or perform surgery to correct the problem.

Diagnosing Scoliosis
Some kids show visible signs of scoliosis. Sometimes a curvature of the spine is obvious: the ribs are pushed out or one shoulder blade is noticeably higher than the other one. Other times, though, it’s not so obvious. And because scoliosis doesn’t hurt or happen suddenly, it’s not always easy to diagnose.

Some schools in the United States test for scoliosis. But the most accurate way to diagnose it is to see a doctor. Doctors routinely check kids for scoliosis during regular physical exams.

Treating Scoliosis
In most cases, scoliosis does not require medical treatment. The doctor just regularly checks the child’s spine to make sure the curve doesn’t become any larger.
If your child needs medical treatment, the doctor might order X-rays to get a clearer view of the spine and refer your child to an orthopedist (a doctor who specializes in treating medical conditions involving the bones).

The orthopedist may mention the Cobb angle, a measure of the curvature of the spine in degrees. The number of degrees helps the doctor decide what type of treatment is necessary. A scoliosis curve of 10 to 15 degrees usually means that nothing needs to be done except for regular checkups until pubertal maturation and growth are complete (the curvature of the spine usually doesn’t get worse after that point).

If the curve is 20 to 40 degrees, the orthopedist will generally suggest a back brace. A Cobb angle of 40 or 50 degrees or more may mean that surgery is necessary. Keep in mind that when the orthopedist draws the lines for the Cobb angle, there is some “measurement error.” This means that the number will change a little from one X-ray to another (up to about 5 degrees), even though the curve hasn’t changed.

Back Braces and Surgery
About 20% of kids with scoliosis need to wear a back brace, which acts as a holding device that keeps the spine from developing more of a curve. A brace won’t ever make the spine straight, but if it does its job well, the curve won’t increase more than 5 or 10 degrees and surgery can be avoided.

The many different types of back braces are typically made of lightweight materials. Some braces are made to be worn 18 to 20 hours a day; others are worn only at night.

Several different types of braces are used, and the one that the orthopedist chooses depends on the child, the location of the curve, and the severity of the curve. The most common type is a TLSO (thoracic-lumbar-sacral-orthosis) brace. This is a low-profile brace, which means it comes up under the arms and fits beneath the clothes. 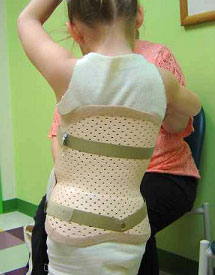 TLSO braces include:
•    The Wilmington jacket. This brace was developed at the Alfred I. duPont Hospital for Children in Wilmington, Delaware. It’s constructed of custom-fit lightweight plastic and can be worn under clothes, so it isn’t visible. It’s designed to be worn as much as possible, at least 18-20 hours per day.

•    The Charleston brace. This is also a low-profile brace, and it bends the spine in an effort to straighten the curve as much as possible to prevent the curve from worsening. This brace puts the child’s body in an awkward position, though, so it can only be worn while sleeping.

Sometimes, even with a brace, surgery becomes necessary to correct the curvature of the spine. Overall, braces prevent surgery about 60-70% of the time.

If an operation is necessary, the orthopedic surgeon performs a procedure that will cause the separate bones of the spine where the curve is to grow into one solid piece of bone. This is called a spine fusion, and helps prevent further side-to-side curving. The surgeon also uses metal rods and screws to correct the spine and keep it straight until the bits of bone join together with the vertebrae.

The surgery usually takes between 4 and 6 hours. The child is usually home within 1 week, and should be able to do normal activities right away (walking, dressing, climbing stairs, etc.). The child may need about a month off from school to get over the soreness from surgery and recover strength, and after 3 or 4 months can take part in most regular activities. After 6 to 12 months, the child can return to almost all activities.

After 6 months, the bone fusion is typically complete. The area where the rods are is “stiffer” than before, but the rods don’t limit movement much — it’s still possible to bend down and move all different ways. The rods are left in the patient’s back, but only because taking them out would involve another operation, which isn’t necessary.

With the right kind of treatment — whether it involves observation, wearing a brace, or surgery — almost every child with scoliosis can have an active, normal life.