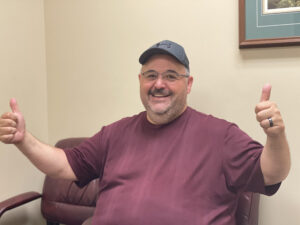 Nine years after first seeking relief from low back pain, Rodney Montoya is no longer in pain and has great hope for the future. Having moved to Alaska for a new job, he looks forward to fly fishing for king salmon and hunting for moose and caribou, activities he has not been able to do for years because of low back pain.

Rodney Montoya’s journey to becoming free from back pain began in 2012 when he underwent an emergency discectomy in Santa Fe, NM, where he lived at that time. Three days later, he returned home from the hospital. Twelve days after surgery, his pain returned. Following an MRI, Montoya’s surgeon told him that he would need to undergo another surgery. Montoya said that he wanted his back fused as he was not able to remain off work for another eight to 12 weeks as he had exhausted his Family and Medical Leave Act (FLMA) benefit. In response, the surgeon said that he could perform up to eight more discectomy surgeries.

Montoya got a second opinion. His new surgeon recommended fusion surgery, which Montoya opted to do. Once in the operating room, though, the surgeon performed a discectomy instead. Montoya awoke in excruciating pain. He received oxycodone, oxycontin and morphine for the pain, but the opioids did not work. The surgeon’s assistant came in and explained that the surgeon had accidentally damaged some of the nerves in Montoya’s leg and wanted to perform another surgery. Instead, Montoya began searching for another new surgeon.

In 2013, while on short-term disability, Montoya found a surgeon in La Jolla, CA, and made plans to visit him in September. However, he received a call from the surgeon shortly before the trip, saying he had a colleague moving two hours from La Villita, NM, where Montoya lived. Montoya made the drive, feeling angry and crying from the pain. He met with the surgeon, who said that he could perform fusion surgery, but it would take him a month to assemble a team. 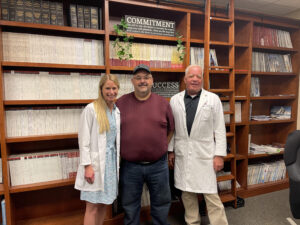 After enduring three failed surgeries by unskilled surgeons, Rodney Montoya (center) was referred to Dr. Michael Janssen at the Center for Spine and Orthopedics by his primary care physician in Pueblo, CO. On March 31, 2021, he underwent spinal fusion and is finally pain-free. Rachel Cengia, PA-C, assisted during his surgery.

On October 13, 2013, Montoya finally underwent fusion surgery on his spine. When he woke up, his legs were paralyzed. “I never prayed so hard in my life,” says Montoya. “I prayed to God that I could feel my legs.” The next morning, he was able to feel his right toe. Later, he could feel his right leg and was able to stand and walk the ward. Initially, he started daily physical therapy, later continuing physical therapy twice weekly for a year. Even though his spine had been fused, Montoya’s pain persisted.

In 2018, his primary care provider referred him to Dr. Michael Janssen at the Center for Spine and Orthopedics in Denver. By then, he had moved to Pueblo, CO, for work. Prior to his provider’s referral, however, Montoya’s condition had worsened, having been hit by a car earlier in 2018, breaking his femur and crushing the C-6 cervical disc in his neck.
Upon seeing Montoya, Dr. Janssen ordered a nerve study of his cervical spine and an MRI of his lumber (lower) spine. The nerve study revealed that the C-6 disc was beyond repair. Dr. Janssen recommended taking care of that condition first. In July 2019, Montoya underwent Total Disc Replacement (TDR) surgery by Dr. Janssen. “Two days later, I had full range of motion,” says Montoya. “I was confident that Dr. Janssen could also fix my lumbar spine.”

Montoya and Rachel Cengia, Dr. Janssen’s physician assistant, made plans for lumbar fusion surgery, but because of COVID-19, Montoya elected to delay the procedure until 2021. As a result of his continuous low back pain, Montoya finally scheduled fusion surgery on his lumbar spine for March 31, 2021. During the procedure, Dr. Janssen first removed previously implanted spinal hardware. He then fused L-3, L-4, L-5, and S-1. “When I woke up, I experienced some pain from the surgical wound but no back pain at all,” says Montoya. “When the physical therapist came in, I stood up on my own. I walked stairs. I walked the ward three times. I had no pain and no need for physical therapy. It was a God-ordained miracle.”

Montoya, now age 50, had waited nine years for his miracle – relief from excruciating low back pain. “I felt 30 years younger after surgery, and I am so grateful for Dr. Janssen, Dr. Clay Dorenkamp (Dr. Janssen’s spine fellow) and Rachel,” says Montoya. “I would highly recommend this team. I am forever indebted to this office.

“So many people have incompetent doctors that they are fearful of being able to find a qualified physician,” says Montoya. “When you find a competent doctor, though, it gives you hope in medicine, doctors and technology. It was always my choice to have surgery. It was never forced upon me,” Montoya says. “That in itself allowed me to make the decision.”

Now, Montoya has great hope for the future. This past summer, he moved to Alaska, having accepted a new position as a construction quality manager of guided missile defense about 90 miles southeast of Fairbanks. As an avid hunter, fly fisherman and hiker, he looks forward to fly fishing for king salmon and hunting for moose and caribou.

“For the first time in 10 years, I can feel my legs,” says Montoya. “I have not been able to hunt, fish, hike, bowl or even go to the zoo for years because I could not walk very far.” Looking back on his journey, Montoya is thankful that opioids did not work for him. “My pain was off the charts, and now it’s almost gone except for a little nerve pain,” he says. “I highly recommend that you explore your options.”

Montoya’s advice to others: “Don’t listen to first opinions and quack doctors who just want to treat the symptoms instead of finding the root cause of the problem. Always be open to researching better providers who can offer solutions that don’t mask the problem. Open your eyes to search outside of the local area where you live. A lot of people get complacent and don’t want to go      out of their hometown or state. Don’t be afraid to ask questions and take a chance. Remember that your care is always in your hands.”

For an appointment with Dr. Michael Janssen,
call the Center for Spine and Orthopedics at 303-287-2800.