World Champion Speedboat racer Rob Unnerstall traces his chronic neck pain to whiplash after a water skiing accident in his early twenties. “I fell going 72 miles per hour,” says Rob. “I thought I was healing, but over time, my pain got worse.”

Rob tried everything from physical therapy, acupuncture and chiropractic care to injections without relief. The gnawing pain worsened and he couldn’t get a good night’s sleep. If he did overhead work, he paid for it the next day. 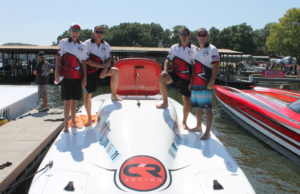 Rob Unnerstall (R) is pictured with CR Racing teammate Casey Boaz (L) and and their sons, Jesse (far left) and Nick (far right), at the 2017 Lake of the Ozarks Shootout in Central Missouri, Photo by Jason Johnson

Almost 30 years passed before the president and owner of St. Louis-based National Cart Company finally decided to do something about it. “I had known Mike Janssen for 20 to 30 years, but I did not know what a good spine surgeon he was until a friend told me,” says Rob. “We have great hospitals and surgeons in St. Louis, but I wanted to make sure I went to the best.”

Rob saw Dr. Janssen at the Center for Spine and Orthopedics in Denver in October 2018. MRI results sent from St. Louis revealed severe left neuroforaminal stenosis at C4-C5 and severe right neuroforaminal stenosis at C5-C6, plus disc protrusions at C4-C4 and C5-C6. After a second MRI in Denver and a thorough review of both studies, Dr. Janssen determined that the pathology that most needed to be addressed were the C4-5 and C5-6 levels.

“I was thrilled about having total disc replacement (TDR) surgery rather than fusion,” says Rob, who not only races speedboats but also flies his own aircraft, skis in the winter and goes fishing and diving.

Rob scheduled two-level reconstructive spine surgery in December when his business was slower. The timing would also give him 60 days to heal prior to his first speedboat race in 2019. 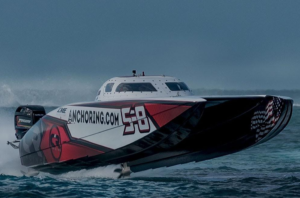 On December 2, Rob flew his plane to Denver for surgery the next morning. His wife, Karen, a registered nurse, went with him. On Monday morning, Dr. Janssen performed Rob’s surgery. When he woke up in recovery, his pain was gone. “I felt better than I had in 15 years,” says Rob.

That night, Rob stayed at the Musculoskeletal Surgery Center, next to Dr. Janssen’s practice. The next morning, he was released, and he and wife Karen went to Estes Park to explore and spend the night. Unfortunately, he got altitude sickness during the night and texted Dr. Janssen at 3:15 a.m. for help. Dr. Janssen called in a prescription right away, and all was well after that. “I could not ask for a more caring, helpful and smart surgeon,” says Rob.

The next morning, Rob and Karen flew home to St. Louis. Since surgery, the 54-year old has slept better and exercised more, including stretching and push-ups. He also began racing again. Earlier this year, in Coco Beach, Rob placed sixth out of 14 competitors after breaking some parts in the rough water. However, the weekend of June 1-2, he and teammate Casey Boaz won their race at Lake of the Ozarks, where they had barrel-rolled their boat the previous year. “It’s always fun to win on our home court,” says Rob. “I’m looking forward to more races.”

He says that surgery has made him more confident in his boat. My mobility is much better than before, and I also feel a lot better the next morning,” says Rob. 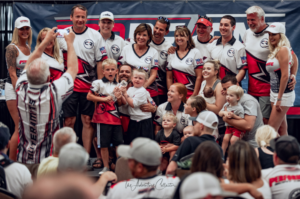 He recommends that others needing neck surgery should see Dr. Janssen. “You want to make sure you have it done by the best,” says Rob. “Dr. Janssen is brilliant. He explains everything that he’s going to do. I had a fantastic experience.”

About Michael Janssen, DO
Dr. Michael Janssen was among the first surgeons in the nation to perform total disc replacement (TDR). He participated in initial clinical studies and has been performing TDRs since 2006 when the FDA approved the ProDisc. Since then, Dr. Janssen has performed more than 1,000 complex TDR surgeries and trained more than 150 surgeons worldwide to perform the procedure. In November 2015, Dr. Janssen published an article on the long term results of TDR surgery in the Journal of Bone and Joint Surgery.

Why Are Women More Prone to Osteoarthritis?
September 12, 2022

Can Wearing The Right Shoes Help Lower Back Pain?
August 31, 2022