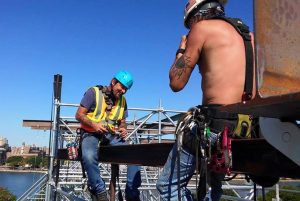 As head rigger, Richard Baiotto has set up steel stages all over the world for various bands, including the Rolling Stones, Metallica, Aerosmith, Carrie Underwood and Katy Perry, among other performers.

Setting up stages all over the world for bands, such as the Rolling Stones, Metallica, Aerosmith, Carrie Underwood, and Katy Perry, had taken a toll on Richard Baiotto’s back. Roller blading and a car accident also accelerated the degeneration in his spine. Despite chronic back pain for several years, Baiotto kept working. In his profession, if you don’t work, you don’t get paid.

Cortisone shots provided some relief for Baiotto’s back pain, but he knew that surgery was inevitable. He and his wife, Tracy, could not find a surgeon with whom they were comfortable in their hometown of Colorado Springs, so they drove to Thornton to visit the Center for Spine and Orthopedics.

(L-R) Tracy and Richard Baiotto traveled from Colorado Springs to Thornton for Ricky’s chronic back pain.

That time came last November while Baiotto was setting up a stage for a Katy Perry concert in Dubai. “I picked up a deck and turned to set it down,” says the rigger of 22 years. “I felt a severe sharp shooting pain in my back. It took my breath away. Then my leg went numb.” After that incident, Baiotto was down for a long time. “The pain was crazy at the end, like being tortured,” he says. “I could not work.”

Many of Baiotto’s days begin at 5 a.m. and may not end until 2 or 3 a.m. when he breaks down a stage and packs it to move to the next concert site.

Last March, Baiotto underwent posterior spinal fusion of his L5 and SI vertebra and a total disc replacement at L4 and L5. The surgery went well. “My leg felt better right away,” says Baiotto. “I felt great. I was ready to go home.”

The healing process took time. Baiotto had pain for the first few weeks and felt a little depressed about not being able to work. “When you’ve worked all your life and are forced to slow down, it’s tough,” he says. After four weeks, though, he felt stronger and began physical therapy. His physical therapy exercises and hot yoga classes helped him regain his strength and flexibility. By the beginning of June, he was lifting, climbing and working hard again. 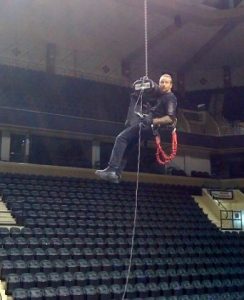 More than 22 years of setting up and breaking down stages caused Baiotto’s spinal discs to degenerate.

This past November, during a break, Baiotto returned to CSO, this time for neck pain. He was diagnosed with two bulging discs and will have two disc replacements in late December while Carrie Underwood is at home and Katy Perry is working on a new album. “After that, I’ll be back on the road for the next two years,” says Baiotto.

Overall, Baiotto says that his experience with physician assistant Rachel Cengia and the staff at the Center for Spine and Orthopedics was great. “The customer service was unbelievable,” he says. “I can’t tell you how much these guys mean to me. They were so worth the drive. I don’t think anyone could have done what he did. We are very grateful”

Baiotto’s advice to others: “Don’t wait. Don’t put it off. Take the time to take care of your body and do the work.”