Nine Tips on How to Stay Safe on the Ski Slopes 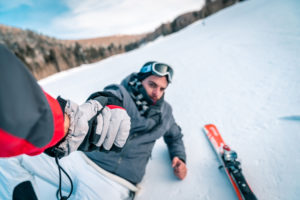 Skiing is exciting, especially in the mountains of Colorado. Safety is always important not only while skiing but while participating in other sports, to prevent breaks, fractures, and back pain. Below are 9 tips for ski safety on the slopes. If you or someone you know has injured themselves contact us here.

The adrenaline rush of skiing and snowboarding means inevitably there are inherent risks. Here are nine top tips to make your experience on the slopes a little safer.

1. Obey snowsports highway code
The FIS (International Ski Federation) has established 10 rules of ski and snowboard conduct that are legally binding in much the same way as rules of the road apply to car drivers. They are all common sense but it’s worth knowing them before hitting the slopes. A key rule is to adapt the manner and speed of your skiing to your ability and to the general conditions. Another is that the skier or snowboarder in front has priority.

2. Know how to avoid collisions
It is essential to be constantly aware of your immediate surroundings. The more skilfull the skier or snowboarder the more time he or she has to glance around. The biggest single cause of collision is skiing out of control. The second cause is the failure of skiers to obey a basic rule: always look uphill before setting off. Remember too that snowboarders follow a different line down the mountain from skiers and may be blind to you on the turn.

3. Don’t lie about your ability
Incorrectly adjusted ski bindings account for many leg and knee injuries. The suitable DIN setting is a complicated equation of age, ability, height, and weight. Don’t be tempted to lie about the first three when getting them fitted, and know your own weight in kilos and pounds.

4. Watch out for ice
In hard-packed snow, it is essential your skis are properly tuned and edges sharpened by a shop technician unless you’re particularly handy at doing it yourself. The passage of skiers and snowboarders can scrape the soft snow from lower slopes – especially those served by artificial snow cannons – leaving large patches of ice. 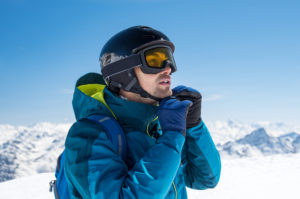 During the last 20 years, helmet-wearing on the slopes has gone from the margins to the mainstream. The shift is partly due to high profile accidents such as former F1 racing driver Michael Schumacher suffering brain damage after a skiing accident in 2013, though he was wearing a helmet. It helped bring into focus that skiing and snowboarding can be inherently dangerous with people sliding down the slopes at up to 50mph.

6. Consider body armor
Should you be inspired by the freestyle ski and snowboard talent on show at the Winter Olympics to hit the terrain park or more modestly some tricks off the edge of the piste, it makes sense to wear a lightweight spine protector. Our round-up highlights some of the best.

7. Ski safely off-piste
Despite all the warnings, many skiers regularly venture away from the prepared runs without the help of a local, qualified guide. Doing so unstable snow conditions may not be too risky, though in early snow you need to watch out for tree stumps and rocks. But to ski in crevassed glacial terrain without a guide is to court disaster.

8. Carry the essential kit you need to go off-piste
Whether you’re skiing off-piste with a guide or not, you will need three essential items of kit – an avalanche transceiver, collapsible three-meter probe, and shovel and be well versed in how to use them. Schniewind suggests a two or three-hour practical training session with safety equipment and refreshing yourself each year.

Another kit to consider is an avalanche airbag system incorporated into a backpack. With a large balloon or balloons that inflate at the pull of a cord, they’re designed to make the person wearing it larger so they naturally rise to the surface of the snow.

9. Stay safe in the trees

The golden rule is always to ski with at least one other person when heading into the trees. Keep them in view as much as possible and if you do lose visual contact, call out to each other and regroup

See tree, ski tree, so the saying goes. So eye up the spaces as the body tends to follow where the eyes are looking. As trees tend to be fairly tightly grouped together, be prepared to make lots of short turns.

Don’t use wrist straps as ski poles can easily get caught on branches.