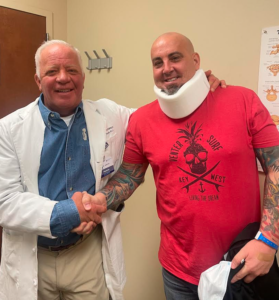 Mike Barnes thanks Dr. Mike Janssen the day after his Total Disc Replacement surgery. “You are the best of the best as a doctor and surgeon,” says Mike. “Again, I can’t thank you enough for taking care of my neck. It’s amazing how good I feel already!”

Mike Barnes woke up one morning with pain in his upper shoulder and down his left arm. He had numbness in his fingers. He went to see his chiropractor for treatment, but after a month, his pain had not improved.

Barnes, who lives in River Falls, Wisconsin, decided to see an orthopedic surgeon in River Falls who had previously performed his elbow surgery. The surgeon ordered an MRI, which showed that Barnes had a herniated disk in his neck. Thus, the surgeon referred him to a spine surgeon in the same practice.

Instead of seeing that surgeon, Barnes sent his MRI results to Dr. Michael Janssen at the Center for Spine and Orthopedics in Denver. Barnes knew Dr. Janssen from powerboat racing in the Lake of the Ozarks and other shared interests, including snowmobiling. He also called a friend in Wisconsin, Danielle Diorio, who knew Dr. Janssen and had had herniated disc surgery by him. She told him that she had “awesome results.” 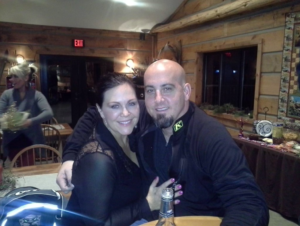 Mike and wife Melinda have dinner in Denver the weekend before his February 14 procedure.

After talking with Dr. Janssen, Barnes scheduled Total Disc Replacement (TDR) surgery on Monday, February 14, at the North Metro Surgery Center adjacent to Dr. Janssen’s practice. He and his wife, Melinda, flew to Denver the weekend before surgery to enjoy the sights. Then, that Monday morning, Barnes had TDR surgery in his cervical spine by Dr. Janssen. The procedure last two hours. “Right after surgery, I felt a little sore but good,” says Barnes. “The numbness in my fingers was gone.”

The next morning, Barnes was discharged from the surgery center and went next door for x-rays and a follow-up visit with Dr. Janssen’s physician assistant, Rachel Cengia. That evening, he and Melinda flew home. 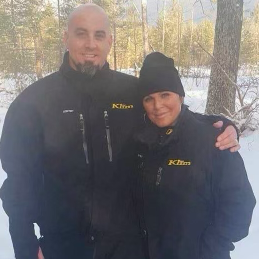 Mike and Melinda once again enjoying the outdoors after returning home to Wisconsin.

A week later, Barnes says, “I honestly felt great. I only needed pain meds for four or five days. I am amazed and would highly recommend Dr. Janssen.”

Post-surgical instructions were no lifting anything over 10 pounds for six weeks. However, Barnes felt so good, it was tempting to become active sooner. “My friend, Danielle, went snowmobiling just two weeks after her surgery,” he says.

His only regret in the process of finding a solution for his condition was going to a chiropractor before seeing a surgeon. “The chiropractor was cracking my neck,” Barnes says. “Boy, did we go the wrong way on that.” 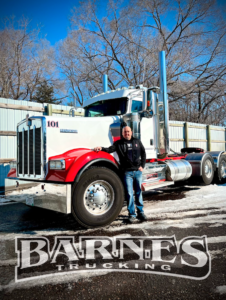 Mike returned to work at his company, Barnes Trucking, within days after surgery.

Since returning home to Wisconsin, Barnes has been back at work at his trucking company, Barnes Trucking, a business he started in 1995. He also looks forward to doing all the activities he enjoys again soon. “I love boating, motorcycling, snowmobiling, trucks and cars,” he says. “Really, anything with a motor.”