Ed Stewart’s Story: From Back Pain to Back in the Boat 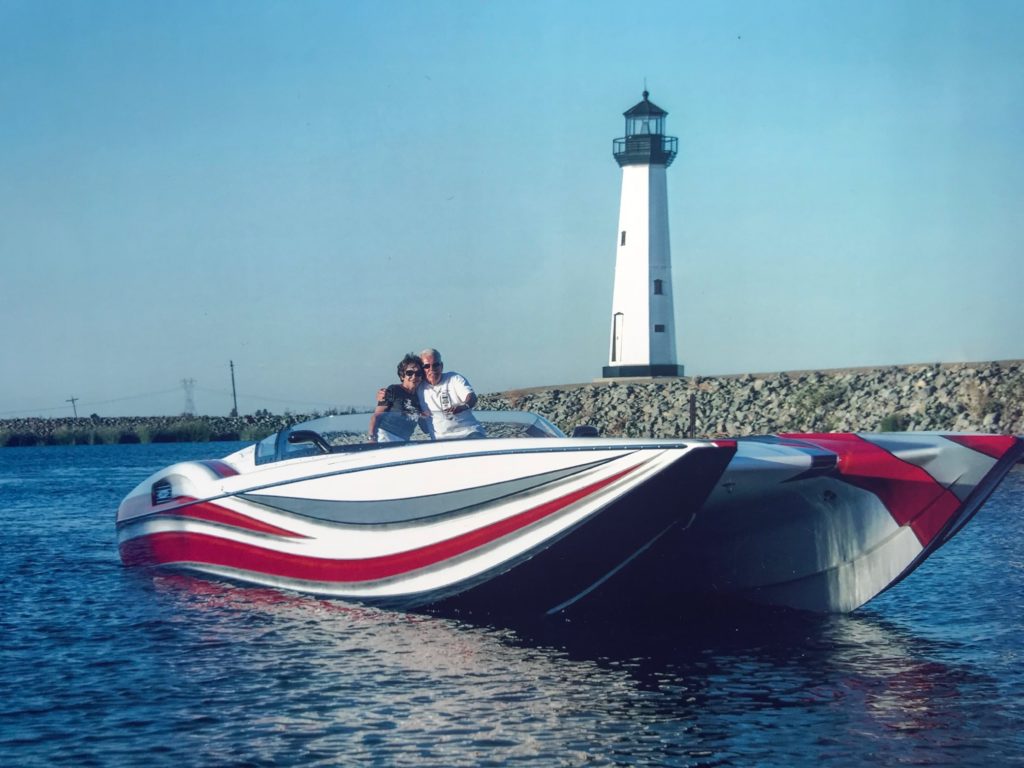 Ed Stewart and his wife of 61 years, Jean, boating on Discovery Bay. Ed built the 38-foot lighthouse six years ago and then donated it to the Town of Discovery Bay.

In August 2017, after completing a Speedboat Poker Run, Ed Stewart was getting out of his speedboat when he realized he could not walk. Friends wheeled him into his hotel in a wheelchair.

Pain shot down Ed’s right leg. Having had a left knee replacement, he thought that his right knee was the problem this time. However, an x-ray showed that his knee was fine. The orthopedic specialist referred him to a back specialist. By then, he was hurting so badly that he wanted to cry when they rolled him over on the x-ray table.

The back specialist recommended therapy and back injections. “I knew I needed more than shots,” Ed recalls. After the appointment, Ed used a walker, took pain pills and sat in a recliner for three and a half months until the following January when his friend and fellow boat racing aficionado, Bob Teague called.

“Bob said to me, ‘Ed, You need to stop what you are doing. Get an MRI and send it to Dr. Mike Janssen in Denver. You need to go see him’,” explains Ed.

Ed took his friend’s advice. He got the MRI and sent his medical records to Dr. Janssen, a spine surgeon and founder of the Center for Spine and Orthopedics in Denver. The MRI revealed that Ed had high grade spinal stenosis, a large disc herniation at L3-4 and L4-5, plus severe degenerative disk disease. Dr. Janssen could treat the 82-year-old man, but for safety reasons, he required that Ed get clearance from his cardiac surgeon who had implanted a stent in Ed’s right leg. The cardiac specialist cleared Ed after he had a second stent implanted in his left leg. 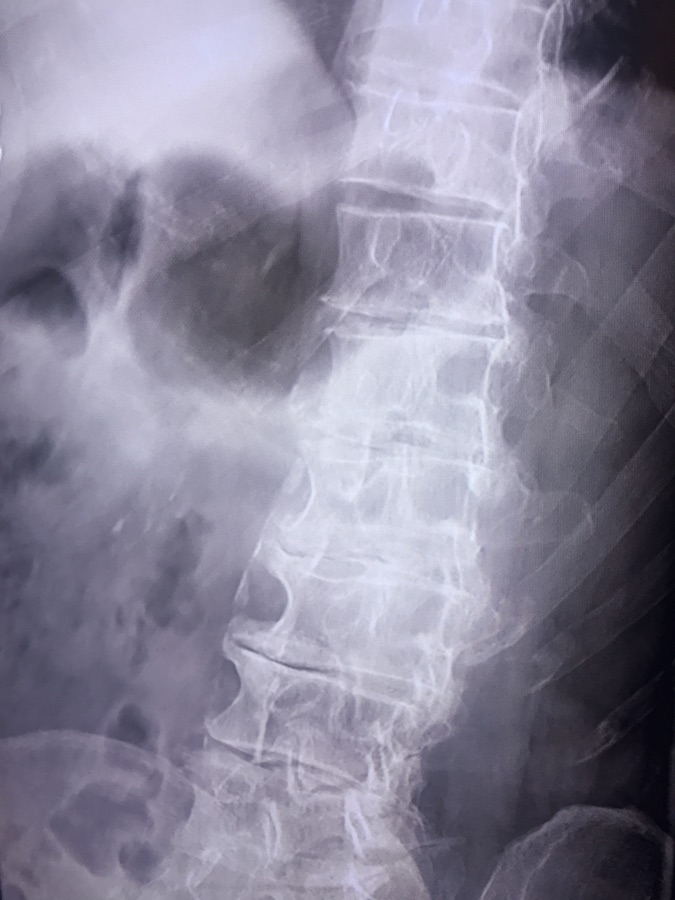 An x-ray of Ed’s spine before surgery shows severe degenerative disk disease between L3-4 and L4-5. Ed also had a severe disc herniation.

While waiting for that day to arrive, some of Ed’s friends discouraged him from having back surgery. Ed, who lives in California, had heard the horror stories of those, who like Golden State Warriors basketball coach Steve Kerr, had complications after back surgery that prevented them from getting back to work and the activities they enjoyed.

Ed ignored the stories. Instead, he trusted his good friend and World Champion Speedboat racer, Bob Teague, who had had spine surgery by Dr. Janssen and returned to racing without any problems. Ed felt confident that he, too, would get the pain relief he desired and return to what he enjoyed most—spending time on the water.

When the week arrived for Ed’s surgery, Bob accompanied him to Denver and remained until the two returned to California a week later. On March 28, Dr. Janssen performed posterior decompression of the bilateral L3, L4 and L5 and posterior and posterolateral arthrodesis L3-4 and L4-5. While performing Ed’s surgery, Dr. Janssen discovered a large herniation wrapped around the L4 nerve root. “It did not show up in the MRI scan because of the severe stenosis,” says Dr. Janssen. “However, I was able to release all of this with minimal blood loss. Ed tolerated the procedure very well.” 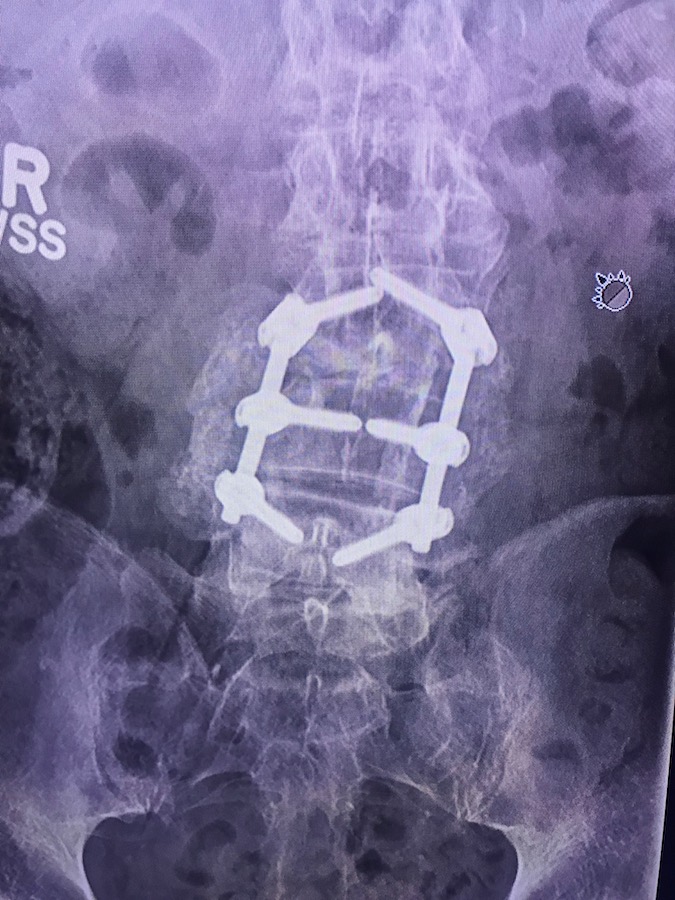 A post-surgical x-ray shows posterolateral arthrodesis (immobilization) of the L3-4 and L4-5. Dr. Janssen first removed arthritic bone and a herniated disk that was putting pressure on Ed’s spinal nerves He then performed fusion surgery. He used titanium screws and rods to provide immediate stability to the spine until a solid fusion was achieved.

For the following five days, Ed began his recovery in the hospital. He walked with a walker initially but shortly thereafter, he was walking without it. On Day 6, he was released from the hospital. Two weeks after returning home, he went for a boat ride with Bob, and within a month and a half, he no longer needed pain medication. “My back doesn’t hurt now,” says Ed. “Sometimes, when I’m on my feet for too long, I get a bit of a backache, but no pain at all. My back is better than I expected it would ever be. And my scar healed just perfectly.”

“Back pain is something you don’t have to put up with. You just have to find the right person. I wouldn’t recommend anyone except for Dr. Janssen.”—Ed Stewart

A year later, Ed left Dr. Janssen a message explaining how well he was doing and how much he appreciated the surgeon. “He’s a pretty darn nice guy,” says Ed. “In my book, he’s a prince for all the volunteer work he does around the world.” Ed also says that the entire care team was good, including Dr. Janssen’s surgical assistant, Rachel Cengia. “She’s a very skilled person, too,” he says.

Ed is very grateful for his friend, Bob Teague. “He went out of his way to take care of me. I could not have asked for more,” Ed says.

Now Ed is ready to get his boat back on the water so he can enjoy the upcoming 2019 boating season. “I’ve never been a golfer, but boating has made my life more of a pleasure,” says Ed. “Prior to surgery, I was hurting so bad that I was ready to give up.”

When asked for the advice he would give others, Ed says, “Back pain is something you don’t have to put up with. You just have to find the right person. I wouldn’t recommend anyone except for Dr. Janssen.”

For an appointment with Dr. Michael Janssen, call the Center for Spine and Orthopedics at 303-287-2800.