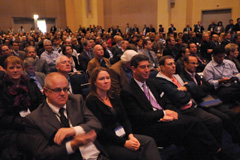 Thursday’s Current Controversies in Spine Surgery symposium featured debates on the role of vertebroplasty and kyphoplasty in the treatment of vertebral compression fractures (VCFs), surgical treatment of the sacroiliac (SI) joint and the risks of bone morphogenic protein (BMP)-2 in patients undergoing spine surgery.

The first debate focused on the treatment of VCFs, and Isador H. Lieberman, MD, MBA, FRCSC, Texas Health Presbyterian Hospital, Plano, TX, argued in favor of vertebroplasty and kyphoplasty for treating VCFs. He began by dismissing the debate over which is preferable.

“These treatment methods are not mutually exclusive,” he said. “These are tools in the treatment spectrum of osteoporotic and osteolytic vertebral compression fractures.”

Dr. Lieberman reviewed an extensive amount of literature, and said that VCFs have a significant impact on quality of life and require treatment. There are safety and effectiveness data for both vertebroplasty and kyphoplasty, he said, but also studies demonstrating little or no benefits. The studies comparing balloon kyphoplasty with nonsurgical management provide the strongest data, showing benefit out to at least one year. However, the outcomes of controlled vertebroplasty studies are mixed. Ultimately, there are many unanswered questions, and additional studies are needed.

This sentiment was echoed by Dr. Lieberman’s protagonist, Mark B. Dekutoski, MD, Mayo Clinic College of Medicine, Rochester, MN. Dr. Dekutoski said that despite some data supporting the use of vertebroplasty, controversy persists regarding this procedure, but there is solid evidence that kyphoplasty is significantly better than nonsurgical treatment. He called for more studies comparing the procedures and evaluating the effectiveness of vertebroplasty.

The session moderator, Jeffrey C. Wang, MD, University of California, Los Angeles, noted “you are both arguing for [the procedures].”

The next debate tackled the role of surgery in patients with SI pain. Michael E. Janssen, Spine Education and Research Institute, Denver, argued that SI pain plays a significant role in the pathology of lower back pain (LBP) and that surgery may sometimes be warranted.

He reviewed a variety of studies demonstrating the benefits of different operative interventions targeting the SI joint, as well as patient satisfaction with the operations.

“In some ways, the SI joint is an undertreated anatomical joint that patients have substantial symptoms on, and I think we should focus on the SI joint so we do not miss the subset of patients who tend not to improve,” he said.

Dr. Chapman began his argument against surgical treatment of the SI joint by half-jokingly categorizing the joint as “an untapped reservoir of business opportunities… however, I’ll be the first to say that we cannot ignore the SI joint in cases of tumor, trauma or infection.”

In specific circumstances, such postpartum instability, tumor reconstruction, sacral insufficiency fractures and degenerative joint disease, the SI joint is often overlooked, and in these circumstance intervention is warranted. However, there are no clinical tests for identifying and evaluating SI joint pain. Bone and CT scans can visualize the joint, but imaging remains difficult, and the SI joint remains the “hidden joint,” Dr. Chapman said.

Surgical treatment of the SI joint is also problematic as fusion is a difficult procedure and it is equally difficult determining when the joint is actually fused. Moreover, there is a paucity of evidence-based data, with most publications being case series. Many questions about surgical SI fusion remain, including associated morbidity, costs, long-term outcomes and local denervation effects, he said.

That last portion of the symposium dealt with controversies surrounding the use of BMP-2 in spine surgery patients. The U.S. Food and Drug Administration approved recombinant human BMP-2 in 2002 for the treatment of single-level degenerative disc disease in the lumbar spine, but its use in 85 percent of all surgeries is off-label, and it has been associated with complications such as inflammation, cancer and retrograde ejaculation.

The causes of retrograde ejaculation are more associated with anterior approaches to the spine and surgical procedures, not with BMP-2, said Dr. Abitbol.