Cullen Lane and his wife sightseeing at Red Rocks after his surgery.

A couple years ago, Cullen Lane began having muscle spasms, extending from his right and left hips down his legs to his feet. A year later, the numbness began, primarily in his left leg.

“It came and went,” he recalls. It affected his mobility, especially his ability to walk far. “Luckily, I work at a desk now,” says the HVAC engineer, who lives in North Carolina. “If I had still been working in the field, I would have had to find another job.”

Lane’s symptoms worsened. By last summer, he could not climb stairs or walk more than about 100 feet without pain. In January, his boss, Jeff Harris, urged him to get an MRI and see Dr. Michael Janssen, a spine surgeon at the Center for Spine and Orthopedics (CSO) in Thornton, CO. Lane had an MRI on January 17 and asked that the results be sent to Dr. Janssen. “Dr. Janssen sent my boss a message that I really needed surgery and that I needed it yesterday,” says Lane.

Lane’s MRI revealed multilevel degenerative disc disease. The results also showed a large disk fragment smashing into the nerves in his lumbar spine at a very high level, causing substantial high-grade spinal stenosis and affecting the nerve roots near his lower back vertebrae.

Dr. Janssen explained Lane’s treatment options. He could live with it, have spinal fusion or undergo minimally invasive spinal decompression surgery. Lane chose the minimally invasive procedure, and he and his wife Rhonda flew to Denver the following Monday for surgery on Tuesday afternoon. Dr. Janssen’s medical assistant, AnaMaria Buscietta, handled the details.

“She was a big orchestrator for getting me in to see Dr. Janssen. She and Crystal (Dr. Janssen’s physician assistant) took care of everything for me,” he says. “It was unbelievable.” 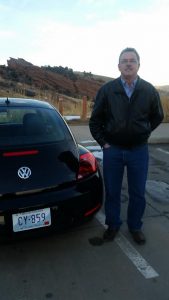 At 2 p.m. the next day, Dr. Janssen began Lane’s surgery began at the Musculoskeletal Surgery Center (MCSC) adjacent to CSO. Within four hours, he had completed the minimally invasive bilateral decompression procedure and removed the large disc herniation. “When I woke up, I knew immediately that something had dramatically changed. I had not felt that good in 15 years,” Lane explains.

Lane and his wife, Rhonda, spent the night at MCSC. The next morning, Lane was discharged. The couple went out for lunch and sightseeing around Red Rock. “I walked 1.2 miles that day,” says Lane. The next day, the two visited Buffalo Bill’s tomb and walked a mile and a half. On Saturday, they returned to their home in North Carolina. “I’ve been great since then,” Lane says. “I have not had any pain. It amazed me. I couldn’t have asked for better results.”

Within six days, Lane was climbing up and down stairs and has had to restrain himself from doing more as directed by Dr. Janssen. His friends are amazed, too. “Six weeks ago, I looked like a 90-year old man with a cane,” says the 57-year old. Lane is grateful to his bosses, Mr. Bull, and his vice president, Jeff Harris for helping him get in to see Dr. Janssen.

“I advise anyone with a back problem to go see Dr. Janssen. He is very well mannered and answered my questions before I even asked them,” say Lane. “I have nothing but praises for the Center for Spine and Orthopedics. I could not have asked for better care.”