Speedboat racer and business owner Bill Allen returned to work three weeks after Total Disc Replacement by spine surgeon, Michael Janssen, DO. Allen had a herniated disc and degenerative disc disease in his cervical spine (neck) and had no pain after the procedure.

Bill Allen works 70 hours per week in his lawn care business, building retaining walls and operating heavy equipment. Though he doesn’t recall a specific incident that triggered his neck pain, he knows that it started last spring. “It felt like I’d pinched a nerve on the left side of my neck, and I couldn’t get rid of it,” says the 48-year-old Iowa resident. “My left arm was going to sleep, and my left ear and jaw hurt, too. It was a nuisance and kept me awake at night.”

Last summer, while speedboat racing one weekend, Allen mentioned his neck pain to Michael Janssen, DO, a spine surgeon at the Center for Spine and Orthopedics, who also races speedboats.

“Mike asked me lots of questions and then told me that I didn’t have a pinched nerve but a herniated disc in my spine that was causing my pain. He said that I needed to get an MRI.”

After Allen returned home, he got an MRI and had the results sent to Dr. Janssen, who had previously performed surgery to relieve Allen’s lower back pain. The following weekend, while at another race, Dr. Janssen explained to Allen that in addition to a herniated disc that he also had degenerative disc disease and would need surgery to relieve his pain. “He advised me to have it soon, but I wanted to race in the World Championship speedboat races last November in Key West so I waited until after the races were over.” 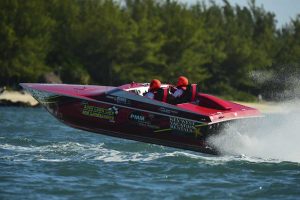 In early December, Allen and his wife, Tammy, drove to Colorado for Dr. Janssen to perform a Total Disc Replacement of Allen’s C6 and C7 vertebrae. “I was very nervous at first, but the more I talked with Mike, the more comfortable I felt. That’s why I go to Colorado,” says Allen. “I’m not comfortable with the physicians in my area and frequently refer others to see Mike in Colorado. In fact, I referred two people to him last week.”

Allen arrived at the hospital at 6 a.m. on December 6. By 11 a.m., he was in the recovery unit, and by that afternoon, he was walking around. “It was a great experience. They do an over-the-top job,” he says. “They know you by name and treat you really well. And the incision in my neck never hurt at all after surgery.”

Allen and his wife drove home the next day. He was told to take six weeks off work to recover. Instead, he returned to work in three weeks. “I stayed home and slowed down for three weeks. I took it easy and didn’t do any lifting or bending,” says Allen. “Since the surgery, I’ve had no pain or numbness in my arm, and everything is normal now.”

Allen went boating again in January, though not on rough water, and now looks forward to the start of the next racing season in April in Cocoa Beach, Florida.

He advises others not to wait for surgery as he did. “It increases your risk of permanent nerve damage,” he says. “Mike said I’d be racing again by the World Championships in November if I had had the surgery earlier, but I chose to wait. He was right, though. I would have been ready.”

Allen took second place at the World Championships last November in Key West, and hopes to have another winning season in 2017.