Back Pain In Men: A Closer Look 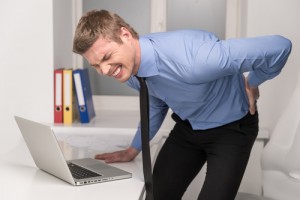 A new study by the British Chiropractic Association reveals that men are experiencing back pain at an earlier age than ever before.

Despite our best efforts to make modern life safer and more enjoyable, it appears there’s no fighting Mother Nature. In conducting a study of 2,127 UK adults, The British Chiropractic Association found that more men experience back pain now than ever, and the aches are hitting us younger. The average age for the onset of back pain was… 37.

Surprisingly, it doesn’t necessarily have much to do with being fat, though 14% of the men in the study thought their bellies were to blame for their pain. Instead, we’re apparently asking too much of our spines without doing enough to take care of them.

Compared to men 30 years ago, we’re far less active overall. We spend eight-plus hours sitting at a desk, and then turn around and hit the gym for some exercise or maybe play a pickup game of hoops. Living in those sort of extremes is terrible for the back, as it’s not really conditioned to lie passively during the workday and then handle abnormally heavy stress. To better care for your back, the BCA suggests lifting things with the knees (not the back), sitting up straight, carrying things as close to the body as possible, and exercise — just be sure to ease into it to prevent injury.

This article originally posted on AskMen.com.