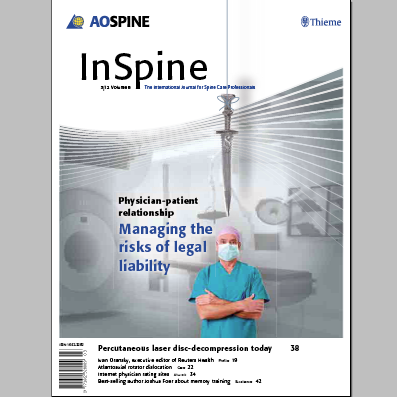 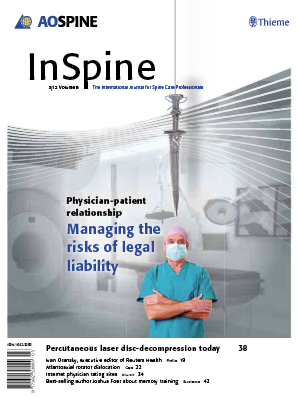 The following is the farewell from Michael Janssen, DO, to the readers of InSpine, as his term of Editor–In–Chief came to a close.

This is my last edition of InSpine as Editor-in-Chief. Given the politics, personal agendas, and ambitions all large organizations face, perhaps it’s the right time to go. I feel that I have done my job, working to make this journal what it is today, to keep it fresh, neutral and open to all. In truth it’s been a pleasure and an honor to do so. First and foremost I would like to thank the thousands of loyal InSpine readers, especially those who wrote me personally to share comments and ideas.

I would like to thank some of the team members who worked together to create each issue. While a number of people have been involved, I must single out a few true Editorial team stalwarts: Ms Chi Lam, who was Managing Editor, Urs Rüetschi, and Jan Marek who have supported me for the past 9 years. I also have to give thanks to Max Aebi and John O’Dowd who sat reviewing possible candidates in a brasserie in Bern, Switzerland in 2003, and then gave me the opportunity to be Editor-in-Chief and bring the InSpine concept to life.

Last, but certainly not least, I (actually we) owe the biggest thank you to Michael Piccirillo, the former AOSpine Executive Director whose bold concept and drive made InSpine a reality. His idea for the journal truly set a new standard in global spine media. So thanks everyone, it’s been a great challenge and competitive race with a serious message. InSpine was a turning point in the life of AOSpine, it set a new direction, it proved we had fresh ideas and demonstrated AOSpine’s commitment to the global spine community.

All that is left is to say good bye and wish Luiz R Vialle good luck. He is adding InSpine to his growing list of responsibilities. I sincerely hope that Luiz during his 3 years as Editor-in-Chief will, together with the new team, look to improve and support InSpine but also maintain the modern spirit, doctrine, and sovereignty of the journal and its core values: a global, topical spine magazine both for clinical but also management practice aspects of our global spine community.

It is time for another checkered flag in my career, and the beginning for a new InSpine editor.