7 Science-Approved Tips for Walking Across Ice 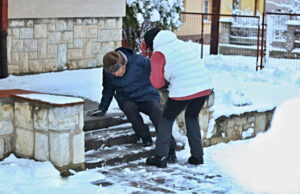 As winter approaches, many of us are at a higher risk of having ice-related back injuries. The impact of slipping or falling on ice can be very dangerous and cause life-changing spine-related injuries. However, some precautions can be taken to protect yourself and those around you. Continue reading to learn about the seven science-approved tips for walking across ice.

Unless you live in a warm climate year-round where the only ice you experience involves cubes that tumble from your refrigerator door, the issue of slipping on the slick surface presents a serious concern. After all, news segments talk of treacherous conditions where people unable to gain traction slide themselves into oblivion just crossing the street.

On the work front, the Bureau of Labor Statistics reports that in 2014, ice, snow, or sleet caused more than 42,000 injuries and illnesses. And of course, there will always be viral ice-slipping videos floating around, like the one of the man who slid along the entire length of his driveway.

The very act of walking is a balancing act we take for granted. “Walking is like falling and catching yourself over and over,” says Kayla Lewis, Ph.D., an assistant professor of physics at New Jersey’s Monmouth University. “You lean forward and fall forward, catching yourself with your leading leg to prepare for the next step. But it’s the friction between the ground and your shoes that enables you to save yourself this way; it prevents your front shoe from sliding forward and your back shoe from sliding backward.”

All of this begs the question: What’s the best way to walk on ice to minimize the risk of falling? To safely sashay over ice, follow the experts’ advice below. Don’t let their words of wisdom, you know, slip away from you.

Clearly, instinct and common sense kicks in the moment you approach the slick surface, telling us it’s virtually impossible (and not really wise) to sprint across an ice-covered driveway. Slow and easy wins the proverbial race, right?

Yes. According to Philip E. Martin, Ph.D., professor and chair of the Department of Kinesiology at Iowa State University, minimizing forward and backward force is indeed essential when walking on ice. “What’s key is trying to keep force applied to the ground more vertically so there’s less force forward and backward—because that’s the part that requires friction,” he tells Mental Floss.

What does reducing forward-and-backward force mean practically? Taking shorter steps. When we do so, the forces applied against the ground in forward and backwards directions are reduced. Therefore, Martin says, we’re not pushing as hard and are “adapting our gait to work with the reduced friction that’s available to us.”

Mark Fahnestock, a glaciologist and research professor at the University of Alaska Fairbanks, has been studying glaciers and ice sheets for the last couple of decades, and during that time has experienced conditions at -40°F in Alaska.

He says that how slippery ice becomes can vary by temperature—so being aware of temperatures can help you figure out how easy or challenging it may be to cross ice. “It’s easier to walk on ice at 0°F or -20°F,” he tells Mental Floss. “Ice is much slipperier when it’s really melting.”

Chalk that up to a film of molecules on the surface that behaves like water, he says, which “becomes more pronounced” in warmer temperatures. However, this isn’t to say you won’t ever slip on ice the colder the temperature gets; he emphasizes, “It’s not that it’s not slippery, it’s just that it’s not as slippery as when it’s warmer.”

4. GO AROUND SLOPES AND STAIRS WHEN YOU CAN.

You should also be mindful of the surface you’re about to set foot on. A flat surface is one thing, but Fahnestock says that “if it’s slanted where your foot meets a driveway, for example, it’s not holding your weight—rather, it’s your weight that’s causing your foot to move.”

“Gravity is going to do its thing whether you like it or not,” Martin says, especially if there’s an icy slope that’s in a significantly downhill direction. Unfortunately, in this circumstance, you probably won’t be able to adapt your gait to prevent slipping, so it’s likely it’ll be a score of Ice 1, Human 0.

Stairs can make navigating ice even more treacherous, but we know it’s not always possible to avoid them. According to helpful hints for walking on ice from Iowa State University, when dealing with icy steps, be sure to use handrails, keeping your hands out of your pockets, and continue to move slowly.

5. KEEP AN EYE OUT FOR CHANGING SURFACES.

Then there are circumstances where the surface characteristics can change without us realizing it. But Martin says not to fret if you’re walking on a straight, dry surface and suddenly encounter an icy patch you weren’t expecting. Maximum friction force is reduced when you encounter this abrupt change, causing you to quickly alter your gait. Sure, you may slip a little since it initially throws you off guard, but “humans are pretty adaptable and recognize challenges quickly,” Martin says. We pay closer attention to surface characteristics than we may consciously realize, and we adjust our stride patterns automatically.

And don’t forget the benefits of appropriate footwear. Martin encourages people to consider a shoe’s material properties, noting that a rigid leather sole is far from ideal as it offers a significantly weaker grip compared to a rubber sole. Of course, traction-improving treads, cleats, or spikes can help too.

Scientists are studying how traction varies among consumer boots. A team of researchers at iDAPT, the research arm of the Toronto Rehabilitation Institute—University Health Network, has tested and rated the slip resistance of nearly 100 boots and spikes in their WinterLab, where they study slips and falls on a floor composed entirely of ice.

Testers secured into safety harnesses walk back and forth across the ice as the researchers slowly increase the angle of the floor until the tester slips. The angle at which they slip is called the “maximum achievable angle”: The higher the angle, the better the slip resistance.

More than 80 percent of the boots they’ve tested failed to score high enough on the MAA to earn a single “snowflake” on iDAPT’s three-snowflake scale, including those from popular brands like Timberland, Sorel, and Terra. The top ranked, with three snowflakes, are all Stabil spikes, which attach to your regular shoes or boot.

7. WHEN ALL ELSE FAILS, WADDLE.

Consider taking an ice-walking cue from those waddling tuxedoed ice pros: Walk like a penguin. Fahnestock says shuffling helps keep your weight in a straight-down stance, allowing your feet to carry your weight carefully and minimize slipping.