Tai Chi for Posture and Back Pain

Tai Chi is a form of exercise that has recently been gaining popularity as a way to relieve and/or manage back pain and neck pain. It is often easy to associate Tai Chi with groups of people in parks or gyms moving slowly and deliberately in synchronization. These people are using the same Tai Chi principles and movements created in ancient China and still practiced all around the world as a healing exercise. 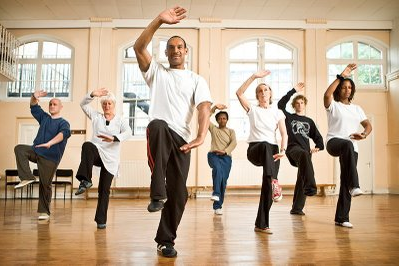 Though the precise origin of Tai Chi is arguable, some facts about its history remain constant. Tai Chi emulates the motions and ideas behind an ancient Chinese martial art called Tai Chi Quan. Tai Chi Quan routines required the practitioners to be tranquil and calm, emphasizing slow and soft movements. Tai Chi is an exercise modified to inherit nearly all the ideas behind Tai Chi Quan, but using the method as a means to attain healing qualities rather than combative awareness.

Unlike other forms of exercise such as yoga, Tai Chi involves a greater degree of movement. And unlike many types of aerobic exercise (such as running) Tai Chi does not involve any jarring motions that create impact on the spine. It is a slow and deliberate, flowing movement of the body.

A number of studies have shown that Tai Chi provides several benefits—physical as well as mental. And some of the benefits of Tai Chi are enjoyed even when not doing the exercises, such as improved posture throughout the day.

Tai Chi has demonstrated usefulness in the prevention and treatment of certain problems such as back pain. Importantly, Tai Chi is non-invasive, relatively inexpensive, and gentle on the spine, so many people with back pain are starting to try it as an adjunct to (or sometimes instead of) traditional medical approaches to manage back pain. Furthermore, Tai Chi does not require any expensive equipment and can be practiced anywhere.

7 Lower Back Stretches to Reduce Pain and Build Strength
December 1, 2021

Yoga Postures to Reduce Back Pain
November 30, 2018
Go to Top