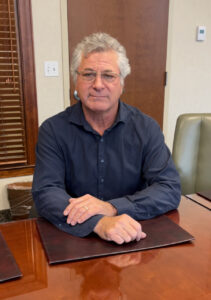 Chronic low back pain caused David Lucero to fall into depression. However, after lower back spinal fusion by Dr. Michael Janssen, David is now pain-free and looks forward to the future.

While in his twenties and thirties, David Lucero had spasms and swelling in his back that continued for more than 20 years. He did his best not to cough or sit up suddenly, which triggered such episodes, sometimes compelling him to lie down on his living room floor for a day or two until they subsided.

A couple of times, when the spasms and swelling failed to stop, he had to take an ambulance to a local hospital for treatment. Unfortunately, due to genetics, David had degenerative disc disease early in his life, and because of his profession in the trucking industry, he was unable to take narcotics for pain relief.

In 2016, his condition grew worse. He began having excruciating stabbing and piercing pain in his left calf, causing the now 57-year-old to become disabled and wheelchair-bound. Around that time, his neighbor, Kerri Munger, who had previously worked at the Center for Spine and Orthopedics, told him about Dr. Michael Janssen, a world-renown spine surgeon who founded the center.

David scheduled an appointment with Dr. Janssen, who diagnosed the source of his pain as a bulging disc pushing on a nerve. On January 23, 2017, Dr. Janssen performed a partial discectomy on David’s L-4 and L-5 discs. His leg pain was gone immediately, but having been in a wheelchair for two months, he had to rehab for six months until he felt normal again.

While David’s leg pain was gone, his chronic low back pain continued. “It was not a sharp pain, just a constant agony in my low lumbar region,” he says. “It felt like a deep bone pain.”

David had dealt with this pain for several years. Center for Spine and Orthopedics physicians Dr. George Leimbach and Dr. Paul Leo treated his pain with injections and referred him for physical therapy. David stretched, did yoga, and performed core exercises, but the pain persisted, and he fell into depression. “I did not have a lot of life left in me. I had resigned myself to the fact that my body was wearing out, and my options were limited,” he says. “I felt like I was on a dead-end road. I didn’t think that much could be done.”

“I bounced back terrifically from surgery,” says David. “Dr. Janssen, Rachel (Dr. Janssen’s physician assistant), and Dr. Georgescu did such an excellent job. My rehab went amazingly well, too.”

David says that he is pain-free today and only slightly less mobile. “I can touch my toes, twist at my waist, and play golf without pain,” he says. “I work out at a gym and lift weights.” David also works on his home and does yard work.

“For a long time, my story was dark and depressing, but now I have a future,” he says. “I owe the next 20 years of my life to Dr. Janssen. He is in the upper echelon of spine surgeons in the world. I feel so lucky to live where he practices.”

David Lucero discusses his experience with back pain and how he found relief and hope after having spinal fusion surgery.