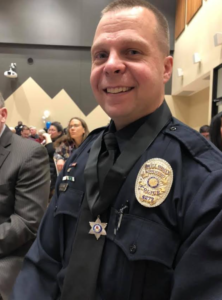 Ricky Evans was able to return to work after artificial disc replacement in his lumbar spine by Dr. Jake Rumley. In this photo, Evans receives a silver star for running into a burning home and pulling out a man who set it on fire.

Ricky Evans injured his lower back when he was 29. He had an MRI at that time. “I basically had a herniated disk, but no major pain,” says Evans. Thus, he visited a chiropractor for regular adjustments until 2016, when Evans threw his back out again. This time, it began affecting his sleep. He had another MRI, which revealed degenerative disc disease at his L-5 and S-I discs. Daily tasks became impossible without pain.

Evans went to see a spine specialist, who recommended spinal fusion. As a highly active police officer, he was concerned that this could lead to early retirement from a profession Evans enjoys. As a crisis team instructor, he trains new officers in arrest control tactics and other critical skills. Mobility and agility are crucial to his profession.

In 2018, Evans saw a second spine specialist. That surgeon also recommended spinal fusion to treat his low back pain. “He told me that not a lot of specialists perform disc replacements in the lumbar spine and that he was not comfortable doing it because it was such a new procedure,” says Evans.

Three more years passed until September 2021 when Evans took his dog out for a walk. Again, he threw out his back. After that, he felt nothing below his waist and could barely walk.

A Third Opinion
Following the injury, he visited his primary care physician, Dr. Marilyn Nguyen at CHPG Northglenn. Fortunately, she knew Dr. Jacob Rumley at the Center for Spine and Orthopedics and referred Evans to see Dr. Rumley.

After reviewing his medical history and imaging results, Dr. Rumley diagnosed Evans with significant disc degeneration causing instability. Evans told Dr. Rumley that he recommended an artificial disc replacement (ADR). “I read that you could have fusion surgery if ADR did not work, but that you could not have ADR surgery after failed fusion surgery,” says Evans. “Dr. Rumley said that I was a perfect candidate for ADR surgery.”

Dr. Rumley explained that ADR surgery would take a few hours and that Evans would be able to go home within days. On November 30, 2021, Evans arrived at Avista Medical Center in Louisville at 5:30 a.m. Dr. Rumley began Evans’ surgery at 11:30 a.m. “Dr. Rumley began my surgery at 11:30 a.m, and I was up walking at 6 p.m.,” recalls Evans. “I was discharged 18 hours later. I went home and began walking around the house. I could feel my legs again, and my back pain was gone.”

For 12 years, Evans’ back pain had kept him from doing all the activities he loves, including hiking and serving on the SWAT team. “Now, my inner battle was not doing all the things I love right away,” says the now 41-year-old. “It was very hard to do nothing for 60 days.”

During his initial recovery, Evans had little pain during the day, but some stomach pain at night from surgery. He took pain medications the first week after the procedure, but none after that.

Sixty days after surgery, Evans returned to Dr. Rumley’s office for a follow-up visit. He got the green light to start riding his bike again. He then decided to begin rehabilitation on his own and started lifting weights, walking, and running. At eight weeks, he ran three miles his first day out.

Evans receives an award for saving a child’s life. The child had been shot by his father while eating lunch.

Though Evans was scheduled to return to work after 12 weeks, he went back to work at 10 weeks instead. During his first week on the job, he was training new officers in defense tactics, such as ground avoidance, escape training and spontaneous knife defense.

“I don’t have pain down my back now,” says Evans, just 13 weeks after surgery. “I feel great. I run daily. I still have a little soreness, but I can feel my legs again. There’s no numbness.”

Interestingly, a friend at the Commerce City police department had fusion surgery by another surgeon about the same time as Evans’ ADR surgery. “He did not do the research, review stats and look for success stories,” says Evans. As of late March, Evans’ friend had not yet returned to the police department.

“If you’re having back issues, I recommend you get a consultation. You won’t regret it,” says Evans. “I was 65 percent when I visited Dr. Rumley, and now I’m at 95 percent after ADR surgery.”

Evans is not the only one in the family who has sought disc replacement surgery for pain. His wife, Stephanie had a double mastectomy years ago, causing chest, neck and arm pain. After that, she saw a pain doctor for several years. He attempted to “melt” the nerves, according to Evans. More recently, Mrs. Evans visited Dr. Rumley, who diagnosed a large disc herniation at C-5-6 in her cervical spine (neck) as the cause of her pain. Her treatment plan includes a future total disc replacement (TDR). “For all those years of pain management, she just needed a disc replacement,” says Evans.

Ricky Evans believes that disc replacement should be the new standard of care if you are a candidate for it. “Would you trust a 1943 car that someone gave you to get you down the highway,” says Evans. “Why trust old technology when newer technology is available?
Evans tells people that no one heals the same. “For me, I had never had a major surgery, but taking that step changed my life,” says Evans. “With artificial disc replacement, you still have motion and can do the things you love.”