Dale Owens’ Story: His Journey to Relief from Back Pain 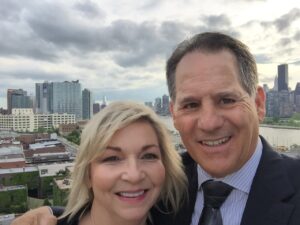 Dale Owens and his wife, Lisa, flew to Denver for his spine surgery by Dr. Michael Janssen. Dale was discharged the same morning after his surgery.

Dale Owens’ back problems began slowly. He started having back pain about two years ago, but it was not bad enough to keep him awake at night or significantly affect his quality of life. He did, however, visit a neurologist at the Cleveland Clinic in Florida, not far from where he lives in Davie, FL. The physician reviewed his MRI and was surprised that Owens’ back condition was not causing him more pain. A six-week physical therapy regimen was initiated and found to be ineffective. This physician said that the condition was serious and that he wanted to refer Owens to a neurosurgeon.

The neurosurgeon reviewed his case and observed two areas of concern, including a bulging disc at L2-L3 and arthritic development at L5 that was possibly affecting a nerve. The plan was to isolate the pain through steroid injections. After two separate injections, there was no relief. A third injection in the area of bone-on-bone arthritis was scheduled. That surprised Owens as he thought that injections could not help with bone-on-bone arthritis, and he was right. Owens declined the third injection.

Owens then consulted a third physician. After reviewing the MRI, he referred Owens to a pain management physician. Owens again dismissed the idea, feeling that it was a physical issue that needed to be corrected.

Owens, a retired police officer of 37 years, now runs race control for the Race World Offshore World Championships in Key West, FL, each November. He had heard of Dr. Michael Janssen, who is the racing association’s medical director, but he did not know his specialty until last fall. When he learned that Dr. Janssen was a spine surgeon, he sought him out, bringing his MRI with him.

Dr. Janssen visited Owens’ race control trailer and reviewed his MRI. He immediately diagnosed Owens’ problem. “He concurred with my first physician that the problem was serious,” says Owens. Though the other physicians thought his pain was coming from his L5 disc, Dr. Janssen said that he had a large disc herniation between L2 and L3. “This is a serious problem,” he told Owens. “The piece is broken off, and it needs to be fixed. I do 500 of these procedures a year, and I would recommend a surgeon in Sarasota since you live in Florida. He’s the guy I would go to if I needed this procedure.”

The Sarasota surgeon would require a couple of trips to Sarasota for a conference and then to schedule surgery. The trip involved a three-hour drive each way, and, by this time, Owens was almost an invalid. “I could not stand for more than 10 minutes,” he says. “The pain was getting ridiculous. My daughter commented to my wife that she ‘hated seeing her father like this.’ I could not finish tearing down the communication antennas after the races in Key West. My daughter and other staff members had to complete the work for me.” 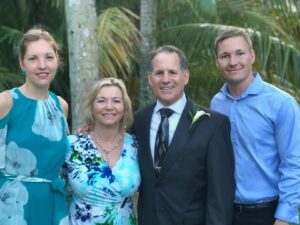 “It does not get any better than working, vacationing, and traveling with your family in a healthy body,” says Dale Owens. His wife, Lisa, is a constant partner at offshore speedboat races. His son, Brian, is a helicopter pilot who flies a safety and marine observer helicopter at some of Dale’s racing events, and his daughter, Ashley, has also been known to show up to help.

Owens flew to Denver on December 7. He had L2-L3 lumbar microdiscectomy surgery by Dr. Janssen at 7:30 a.m. on December 8 at the North Metro Surgery Center adjacent to Dr. Janssen’s practice. He checked out at 11 a.m. that same day. “I walked out a whole new person,” he says. “I knew Dr. Janssen had fixed my problem.”

The following day, he walked a half-mile on a treadmill, and within two days, he was driving around Denver with his wife trying out area restaurants.

Owens describes his experience at the Center of Spine and Orthopedics as unparalleled. “The professionalism Dr. Janssen’s office showed me was incredible,” he says. After arriving in Denver, Owens had a 1 p.m. pre-surgical appointment with Dr. Janssen’s physician assistant, Rachel Cengia, PA-C. Then, he had a debriefing with Dr. Janssen. That evening, Dr. Janssen had Owens get a new MRI as the other one was four months old, and he wanted to see if anything had shifted. “Nothing had changed much,” Owens says. “My bulging disc was still pushing into the nerve, and they were concerned that it could be pushing into the end of the spinal cord.”

Members of his surgical team put all concerns to rest as Owens met each one. He talked to his anesthesiologist before and after surgery. He spoke with the clinician responsible for keeping an eye on his nerves during surgery. “He assured me that he would stop the surgery if anything was not right,” he says. “Each person was amazingly professional. They introduced themselves and their role. I am so grateful for all the people involved.”

Owens does not know how his bulging disc occurred. “I did a lot of sports when I was young,” he says. “I took some pretty bad spills while waterskiing. As a police officer, I was involved in several physical altercations during my career with the Sheriff’s Office.”

A burning sensation in Owens’ left hip was the first sign that he had a problem. When it did not improve and started affecting his sleep, he realized something was wrong and began seeking help. 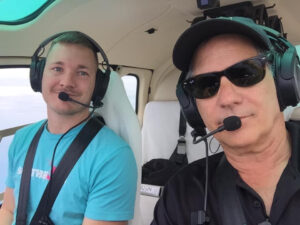 Rachel Cengia, PA-C, Dr. Janssen’s physician assistant, saw Owens for his first post-surgical visit on December 9. “The surgery was very successful,” she told Owens. “There were no issues with puncturing the nerves. It all went very well.”

Owens Reflects on His Journey

“All I can tell you is that Dr. Janssen was extremely confident of what was going on with me,” says Owens. “My original doctor handed me off. The two doctors after that had no sense of confidence regarding the actual cause of pain and lacked a plan of action to fix it. Dr. Janssen mirrored the first doctor in terms of seriousness, but he told me that my problem was between my L-2 and L-3 disc, not L-5 like the others. Dr. Janssen did say that it looked like there were issues with the L-5, but that it could wait.”

He says that it was Dr. Janssen’s confidence in what was wrong that prompted him to fly to Denver for surgery. He strongly advises others to get multiple opinions. “There are a tremendous number of doctors out there. I would highly recommend a second, third and fourth opinion,” he says. “I would also recommend that Dr. Janssen be one of them if not the first.”

The type of surgery that Owens had is based on MRI results. “It’s not hard to mail an MRI and have another doctor give you a second opinion,” suggests Owens. 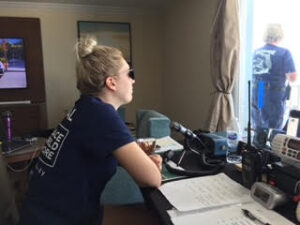 Owens looks forward to doing all the things he loves without thinking about his every move. His first offshore speedboat race will be this May in Cocoa Beach, and he may go to Daytona Beach next to serve as a marine observer, watching out for dolphins, turtles, and other sea life during races. Owens’ son is a helicopter pilot and flies a safety and marine observer helicopter at some of the same events. His wife is a constant partner at the races, and his daughter has been known to show up and assist.

“I can’t thank Dr. Janssen and his staff enough for what they did for me,” he says. “It is so nice having my life back. It does not get any better than working, vacationing, and traveling with your family in a healthy body.”

To schedule an appointment with Dr. Janssen, call the Center for Spine and Orthopedics at 303-287-2800.